Kate and I have spent lots of time over the last two weeks (and over the last 33 years) driving to and from places. In the beginning, I was most often the driver (I, after all, have a Y chromosome). There were major flaws in this approach for us. First, I have attention span issues. Though I am probably better than Kate at knowing precisely where the car is on the road, my mind wanders. Second, Kate is, by her own admission, a terrible rider. The frequent sharp intakes of breath are distracting and offensive to the driver. I can read in a car. Kate gets nauseated if she reads (even if she reads a map - which, by the way, isn't a great skill of hers even outside a moving car).

So long ago, in an aggravated and less than pleasant state, I stopped the car, handed Kate the keys and said, "All right, you drive!" Though it was intended as a rebuke, it was inadvertently a great decision. 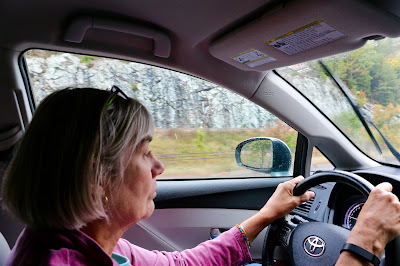 Kate always pays attention. Look at that classic "10 and 2" hand position! Her speed is reasonably rapid, but safe. She's a little shy about passing on two lane roads (the Y chromosome might help out a bit there), but she keeps us safely heading down the road, rain or shine (yesterday, as we were driving to Montreal from Saratoga Springs, NY it was light rain, but quite beautiful). A fact I could observe in detail since I was in the role of rider. 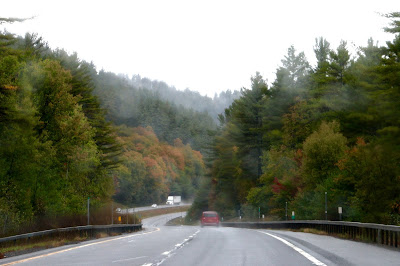 I have done a bit of driving on this trip - most notably a nighttime drive to a restaurant in Somerset, PA. I did OK. Only ran one red light when my mind wandered off to consider the exact location of a Mexican restaurant we had considered but rejected for what turned out to be a surprisingly good Japanese restaurant in the middle of nowhere.

But I do have a role in this operation. I am the Nagavator. As we travel I ponder maps and routes, sights and points of interest. It's not a passive activity. I am excellent at converting the images on a map into real world action. It is with no little pride that I report that in grade school I always was in the 99th percentile in "Work-Study Skills" (much of which involved map reading for some reason) on the Iowa Tests of Basic Skills. 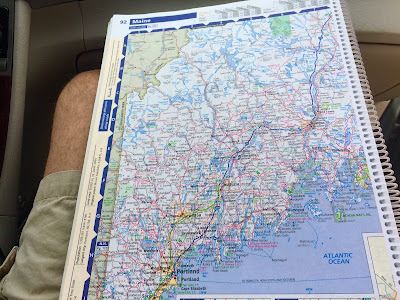 And with the frequent availability of cell phone service, I have been able to take my nagavation skills to the next level. It's much easier than it used to be to find fun, off the beaten path, restaurants. On our last trip, finding "Thai Smile" in a small town in Kentucky where the alternatives were fast food was a masterstroke. Yesterday, we breakfasted at The Triangle Diner in Sarasota Springs. 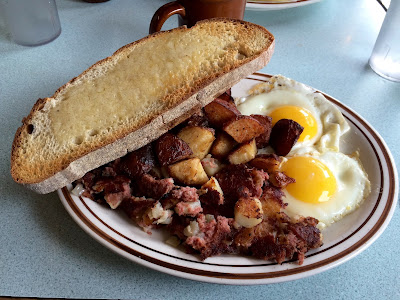 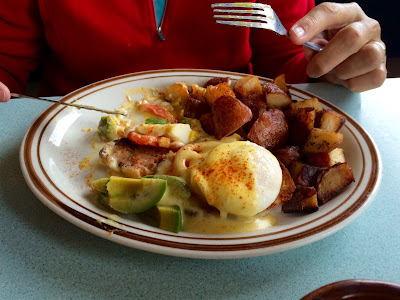 Trust me, if you are in Sarasota Springs this is a better alternative than coffee and a croissant at Starbucks - although to be fair the coffee at Starbucks is much better.

Sometimes too much reliance on the phone has its downsides. Yesterday as we drove into Montreal, I trusted the Google Map's directions without checking the map on my own (our atlas doesn't include Canada - that's my excuse and I'm sticking to it. But I did have a small map in a Montreal travel book I bought before our trip and I failed to use it). Google had us make a left when we should have gone a few blocks to our right. This led us right into a protest being made by thousands of angry teachers! At least they were teachers. And they were angry about certain teaching issues in Quebec that aren't particularly clear to me. They were able to separate their anger about those issues from any particular anger at two Minnesotans driving a green Toyota. Unfortunately, they seemed to fail to grasp the subtle nuances of not walking across the street like a herd of lemmings against a red light. The result was two stranded, confused and - it must be said - tense and snappish retired persons in a car going nowhere. It gave us some time to determine where we really needed to go. Which we were unable to do until we got the assistance of a nice man who was not a teacher (he was walking in the opposite direction of the swarm of teachers, getting nowhere fast). He was kind enough to help us find our way. I even took the wheel for the last part of the drive. We made it to the wonderful apartment where I sit now without too much further trouble.

I think that many of the divisions of labor Kate and I have settled on are a good examples of what couples can, or should, do. We fill gaps for one another. It's sometimes a little hard to admit that your partner is better at something than you are. On matters of style or party or menu planning, it has always been impossible for me to deny Kate's obvious superiority. And it's probably obvious to Kate that I can do math in my head better than she can. But we have also discovered lots of more subtle ways that we can fill gaps for one another. For, example, in preparing some meals (which Kate has planned beautifully) I can add some value right at the end in helping to ensure that all the food is ready more or less simultaneously.

And now for something completely different, a bit of a trip summary:

Oddly, this trip has seemed to involve lot's of M's.

Sailing in Lake Michigan with our good friends Dan and Francine. Sometimes Kate was at the wheel. 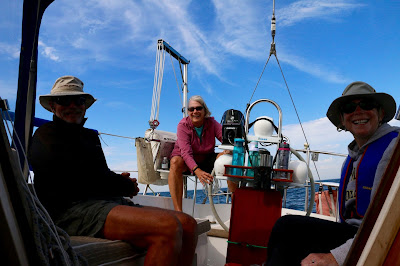 Other times we had normally crowded bays all to ourselves in the unseasonably warm September days. 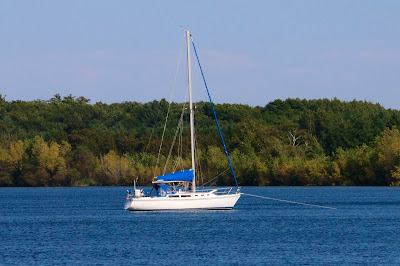 And we somehow were also able to find our way to shore for some refreshments. 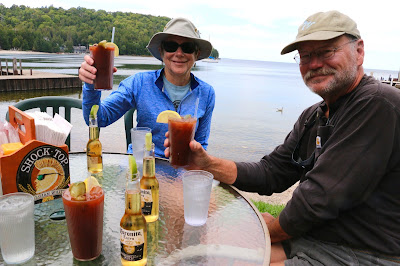 My nagavation skills enabled us to spend a nice evening at the very north end of Lake Michigan in Manistique. We dined at an odd but good Chinese restaurant instead of the Bob's Big Boy that was our alternative. 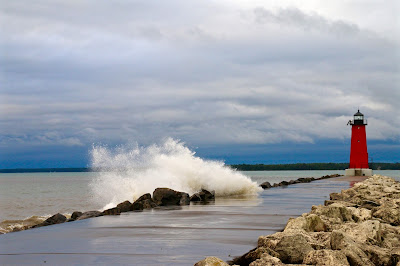 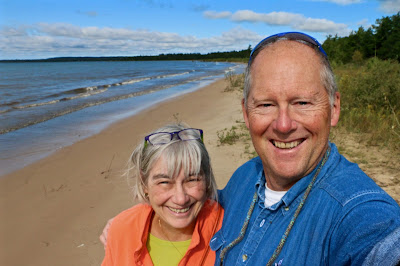 We crossed over the Mackinaw Bridge to leave Michigan's Upper Pennisula.

We took the ferry to Mackinaw Island for a lovely day walking there. 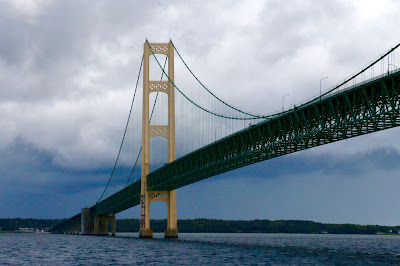 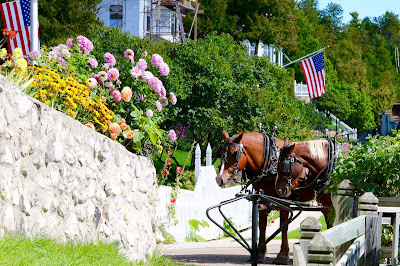 Then it was on to Rockford, Michigan for a really fun evening (and an amazing lamb chop dinner) with Kate's long-time friend Barb Stuart and her partner in meal preparation (and life) Sally Klokkert. 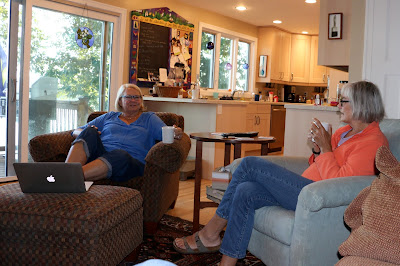 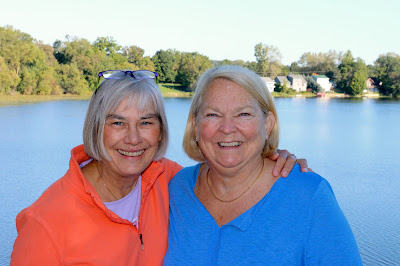 Next we headed to Kate's Mother's house in York. Peter and I planned his surprise appearance there - and it went wonderfully. Kitty and Bob wondered who the beardless young man walking into their house on a Thursday at 10 pm was! 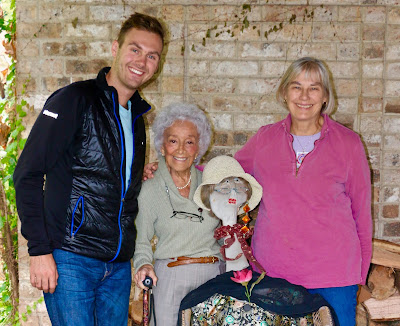 While there, we had to make the obligatory trip to the Market. 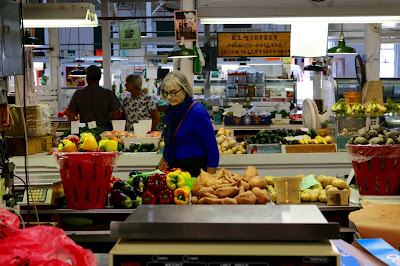 Then it was off to the Baseball Hall of Fame in Cooperstown, NY to explore the baseball heroics of Musial, Mantle, Mays, Mathewson, Manush, Maranville, Maddux, Marichal, Matthews, Marquard, Martinez, Murray, Mazeroski, McGraw, Mize, Morgan, McCovey, McGinnity, Medwick, Molitor and Clemente and Stargell. 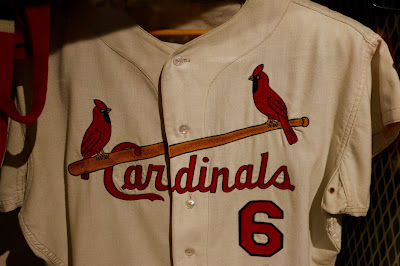 We are now in Montreal for five days that promise to be glorious. They know food here. The city is beautiful. They speak French here (I'm told in a slightly different way than in Paris, but I'm sure I can butcher both versions of French with equal skill).

Then it's on to Maine and eventually Minnesota. A great trip so far. Two thuMbs up!