On drizzly Sunday afternoons I am sometimes drawn to watching sports on television. I always wonder why. But the draw is there. So it was clear to me early that I needed to devise a plan to avoid this hideous waste of time on this of all days. Kate has been gone for the past week (in Pennsylvania - ominously, as you will soon see, in Yorktown). So I wanted to spend time with her. Peter was selling shoes this afternoon. So it occured to me as I drank my coffee that a movie might be nice. Kate and I both like romantic comedies, and I am a fan of Mark Ruffalo. So I thought it would be fun to see a matinee of "Just Like Heaven."

Kate quickly agreed to my plan of seeing a movie - adding only that she needed to pick something up in Edina. So as I drank another cup of coffee I scanned the paper and found that the movie I wanted to see was showing at the Yorktown Cinema Grill.

Kate and I arrived at the Yorktown Mall about 25 minutes before the movie. We bought our $2 bargain-priced tickets and then wandered the strip mall, looking at plastic pumpkins drastically reduced by 70% (which we narrowly resisted). It was a strange ticket sales setup at the Cinema Grill, to say the least. A ticket seller behind a glass partition in a narrow blue hall. But I didn't think much of it. Kate, the more observant of the two of us, noted the smell of fried food. As we perused plastic pumpkins we were laughing about the as yet unexplored Yorktown Cinema Grill.

About 10 minutes before showtime, we returned to the Yorktown Cinema Grill. We were about to enter another universe. For the Yorktown Cinema Grill is not just a movie theater. Though I had missed some rather obvious clues, it is in fact a CINEMA GRILL. We entered the theater expecting the standard seating. But no! What we found were dozens of little tables with two chairs each, tiered for easy viewing of the movie screen. Having blundered into the world of "Cinema Grilling" I didn't quite know what to expect. The floor could have used a quick vacuum job. And the place didn't smell great. Kate and I kept looking at each other and laughing. On our table was a menu. Though we knew that South Beach Diet items were not likely to be found, we looked over the menu. How often do you wander into a new world on a 25 hour birthday?

And the menu items didn't look too bad. Sierra Nevada Pale Ale! Nachos! (Kate favored cheese nachos but I, the birthday boy, talked her up to vegetarian nachos). So we decided to order a pitcher (A PITCHER!) of Sierra Nevada and some nachos. We didn't quite know how to order, but we figured it would all work out. About 5 minutes late, the movie started. I thought it would be the normal 10 minutes of previews and ads. But no, it was the feature. As the lights dimmed our waitress came to our little table. I had a little coffee stomach (Dr. Barn's cure to this malady can be found at the Plasticville blog). So I was really looking forward to a Sierra Nevada. Kate was ready and placed our order. The waitress quickly replied that they didn't have cold pitchers of Sierra Nevada Pale Ale. They did, however, have room temperature Miller Genuine Draft. Kate and I have standards. So we took a pass.

Throughout the movie the waitress' head could be seen moving back and forth across the bottom of the screen, serving those patrons who didn't have their heart set on Sierra Nevada Pale Ale and nachos. The movie beat televised sports by a wide margin. But honestly, I don't think Cinema Grilling is the wave of the future. Especially if they don't cool the beer.
Posted by Stan Oleson at 10/30/2005 05:32:00 PM No comments:

Heisenberg's uncertainty principle in quantum mechanics is sometimes described, somewhat inaccurately I'm told, as establishing that the precise measurement of the position of a particle necessarily disturbs a particle's momentum. Therefore you cannot measure with precision both a particle's position and momentum. It's a law of nature (though as an interesting aside Einstein didn't like it. This was the source of his famous quote "God does not play dice"). Believe it or not, I don't have a lot of need to precisely measure the position and momentum of particles. Still, I do find this sort of thing fascinating. And I love a good physics joke. Like these two uncertainty principle jokes -

A quantum physicist is stopped on the highway by a police officer who asks "Do you know how fast you were going, sir?", to which the physicist responds, "No, but I know exactly where I am!"

Physics building graffiti - "Heisenberg may have been here."

The characterization of the uncertainty principle that most interests me, whether it is accurate or not in a purely scientific sense, is that "observation of an event changes the event." A true statement if ever there was one. When I have a camera, I sometimes get so lost in recording the moment that I neglect to experience the moment. In some ways, I was so involved with trying to "capture" this sunrise on our recent Boundary Waters trip that I didn't experience it as well as I might. Of course, I can reexperience it in some small way later. And that is part of the charm and joy of canoe trips for me. So I take my camera along. But there is no doubt that the "observation of the event changes the event." 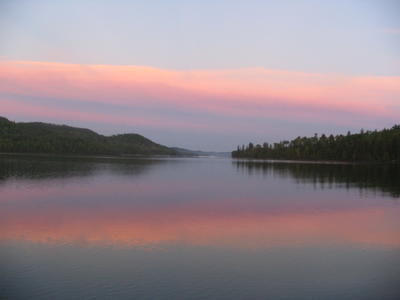 What made me think about the uncertainty principle lately is the speedometer I bought for my bicycle. I've avoided this purchase for years. Not for cost reasons. Just because I was afraid that if I had a speedometer I would be so busy tracking my time and speed that I would forget to enjoy the ride itself. And I was somewhat right. I am now sometimes overcome with a strange compulsion to check my time at particular spots along my ride. To feel good when I'm going 16 miles an hour where I "normally" go 14. Notwithstanding the fact that the reason I am going faster is the tail wind that is pushing me along. For a few days I took the speedometer off my bike. But then I decided that for my personal growth I needed to learn how to ride without paying excessive attention to the speedometer. So if you see some idiot riding between downtown Minneapolis and St. Paul who is paying too much attention to his speedometer, it's probably me. I won't know where I am, but I'll know exactly how fast I am going.
Posted by Stan Oleson at 10/05/2005 09:45:00 AM 4 comments:

Lately I've been busy taking photos, potentially for the Scoular web site. This seems like a good place for reflections, so I thought I would post a few: 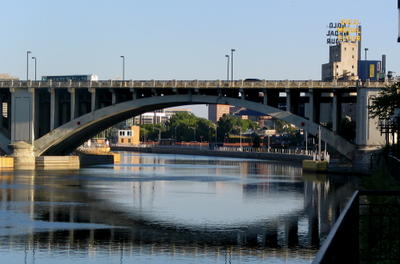