Fish and Whistle, Whistle and Fish

It's my opinion that there is little to compare with the joys of lazily fishing from a canoe in a lake in the Boundary Waters. Periods of quiet paddling in an incredibly scenic and peaceful place, interrupted by the explosion of a fish attacking whatever lure you have gently placed in the water. From previous trips together it was clear that Plasticville's esteemed mayor Crown Rudolf enjoys the same thing. We pledged to take a trip north this year to enjoy the woods and especially to test our fishing skills in such a lovely setting. 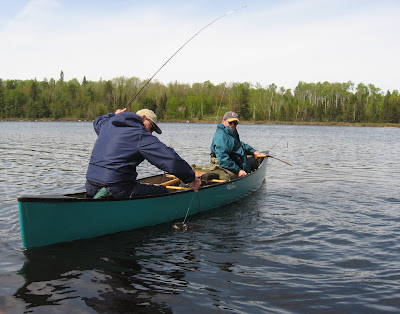 We took it upon ourselves to recruit another boat of outdoorsmen for our trip - the experienced and wily angler C. Walter Lack, and the relatively inexperienced Cherry Boy, J. Thomas Seymour. Even his name caused problems with the Minnesota fish licensing authorities. Perhaps they were reluctant to license the owner of the "Fighting Bullwhip" fishing rod. And what kind of a first name is "J."? Whatever the reason, it took all of my lawyering skills and $30 of Tom's money to enable Mr. Seymour to ply the waters of Minnesota. But on a Thursday a few weeks ago - off we went to the woods.

This is a Train Party group, so it goes without saying that a contest was established. Actually, three contests. A team contest, with the winning team being the twosome with the most credited inches of fish - based on a scientific, complex and sometimes changing formula. A second contest utilizing the same formula was established to determine the MOST VALUABLE FISHERMAN AND GREATEST FISHERMAN IN THE UPPER MIDWEST. And finally a more subjective contest - the contest to boat the "Most Impressive Fish, All Things Considered." This is the contest which Harry and I have on our fall trips - so I felt duty bound to make every effort to score well in this event.

Our plan to fish in East Pike - in the area where Wein's grandfather, the venerable Doc Johnson, built his cabin decades ago - was thwarted by a large fire. So we diverted to the very west end of the park to Trout Lake. That allowed us to spend a night enjoying the hospitality of my friends the Remicks on Black Duck Island. 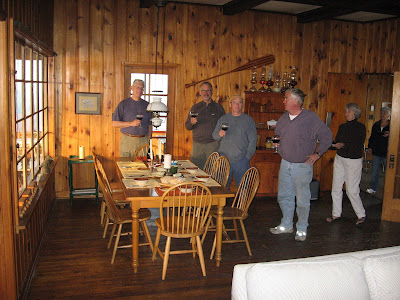 And then it was off to Trout Lake - a large lake and one of the few in the BWCA on which motors are allowed. That wasn't a plus - but it worked out fine. Oddly, on Friday when we put in boats with motors were everywhere. But the frequency of hearing motors decreased throughout the rest of the trip. I don't think that was due to any alcoholic haze. Perhaps the changing weather. Who knows.

The highlights of the first day's fishing was the lovely six pound Lake Trout conjured from the waters by Tom "the Snake Charmer" Seymour (so named because of his amazing ability to entice small to medium sized northern's to his lures). Mr. Green added a nice though somewhat smaller laker to the larder, and dinner was secured. 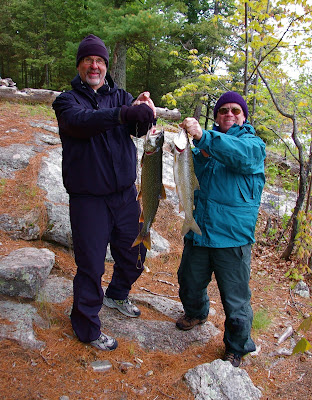 Sunday dawned with snow falling gently - a first for me in the Boundary Waters. I think the variability of the weather is illustrated pretty well by this photo: 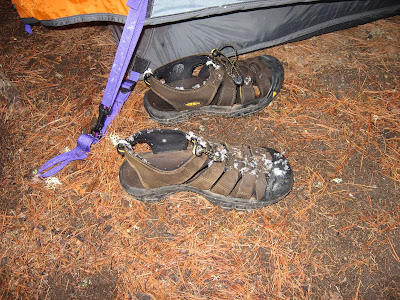 When your sandals are snowy, you know the weather is changing. And on Sunday my fishing luck changed in a big way when I hooked a very large northern. Tom Seymour and I had quite a time getting the fish in the boat - but it was really fun to try to land a 40" fish. Unlike the smaller fish I've caught in the past, there was no way to get this one in the boat until she was tired out. So, oddly enough, once in the boat there was little of the thrashing around that I associate with northerns. 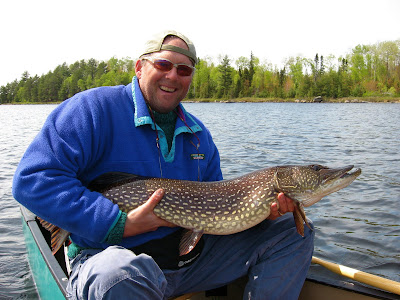 After this photo and a couple of others, the northern was returned to the water. I hope that by now she is the proud mother of another brood of fish. Wein followed up my northern with a nice bass, an even nicer walleye and we had the makings of yet another fish dinner. Curt's skills as a fillet master were a wonder to me - and his cooking skills were almost as developed.

When all was said and done, Wein was officially named the MOST VALUABLE FISHERMAN AND GREATEST FISHERMAN IN THE UPPER MIDWEST. There was a small amount of grousing about the fact that his paddle remained a bit on the dry side while he fished. But my man fished for the cycle, catching all four species of fish. The Snake Charmer came in second, closely followed by Curt (who rallied at the end after a pitiful start as his experience and skill began to show). I brought up the rear - too far behind for Wein to carry us to the team championship. But I did win the "Most Impressive Fish, All Things Considered" contest.

Of course everyone was a winner. The fact that you are able to go to a great place with great friends is a victory in itself. Some of life's best moments - a most impressive trip, all things considered.
Posted by Stan Oleson at 6/03/2007 05:54:00 PM 1 comment: