My favorite player in this year's NCAA tourney has been Joakim Noah. Not so much because of his play, which has been magnificent. Because of what he has said.

In an interview session with dozens of reporters before the Minneapolis regional, Noah was quoted as saying, "If we worried about all the stuff you guys worry about, our heads would explode." Which makes, more succintly than I was able to, the point I was trying to make in my note about the differing approaches of 20 year olds and 50 year olds in "Thelma and Louise 2" a bit further down the page.

But my favorite was his response to a sportswriter who asked him to compare his Florida team to Michigan's Fab Five. He replied simply, "The Gator Boys are hot, so no comparisons." This guy plays in the moment, and seems from his answers, to live that way too. So on Saturday, when the game tips off, I'll probably be rooting for George Mason. Whatever the moment demands. I hope he understands, and I think he just might.
Posted by Stan Oleson at 3/29/2006 08:55:00 AM No comments:

Alone In A Crowd

Friday was an unusual evening for me. As a confirmed college basketball junkie, I am always interested in basketball this time of year. A Scoular friend was in Minneapolis Friday to meet with a group of lawyers (which did not include me it being Friday - one of my many days of rest). He had called his Wells Fargo contact in Omaha about the possibility of tickets and, amazingly, had rounded up two tickets in Wells Fargo's corporate suite for the Villanova/BC and Florida/Georgetown games - one of which I was offered. The plan was that I would meet Roger and my friend Joan at the Little Wagon, a "watering hole" near the Metrodome at about 4 p.m.

I arrived at The Wagon at 4 to find it filling up. But I nabbed the last table, saved a couple of seats for Joan and Roger and sat as the bar filled up. And up. And up. A hour and two beers later and still no Joan or Roger. It was a standing room only crowd, with me holding up three seats for friends who were actually listening to lawyers drone on about profit sharing plans. Finally Joan and Roger made their way through the crowd with time for a quick beer and then it was Roger and me making our way to the game.

Imagine our surprise when we arrived to find Suite 129B empty. By some weird circumstance we were the only two people in the suite. Very odd in a dome loaded with 26,00 basketball fans. The 'Nova / BC game was lots of fun. Ugly basketball, but very compelling nonetheless. Nova won on a last second goaltending call (which we could check on replay the two televisions in our suite). Roger had a 10:30 flight back to Omaha, so he took the train to the airport after the first game. So for the Florida / Georgetown game I was alone in the suite. 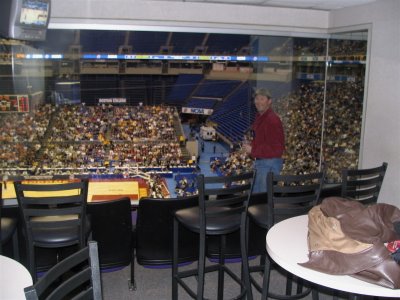 As I watched the second game alone with my scotch, with the teeming masses cheering outside, I felt a bit like the famous recluse Howard Hughes. Good thing my camera has a self-timer.
Posted by Stan Oleson at 3/25/2006 04:04:00 PM 1 comment:

It's that time of year again. The time when people across the U.S. try to emulate Nostradomus - divining the fortunes of sixty four NCAA basketball teams. Over the years I've developed several of these bets. Lots of lunches on the line. But really it's all about bragging rights. The Thursday and Friday rounds just completed are one of my favorite times of the year.

But for me, the Masters, the grandaddy bet of them all, is the draft style bet I do with Harry. If anything, Harry is more analytical than I. We've been doing this draft for a long time. We're about even over the years (and if that's my impression you know that Harry must be ahead). This year we held our draft on Tuesday with a couple of drafts of Surly beer. Harry, as always, pondered heavily on each pick. 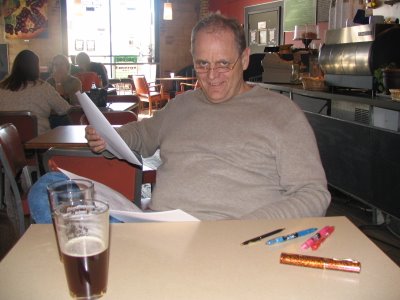 I've been watching those poker shows on TV. So this year I cleverly used sunglasses to hide my churning emotions. 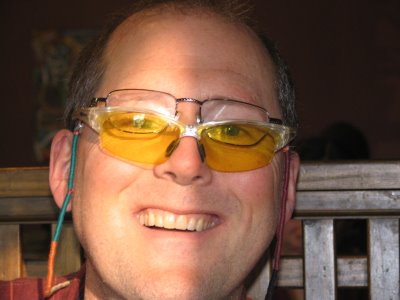 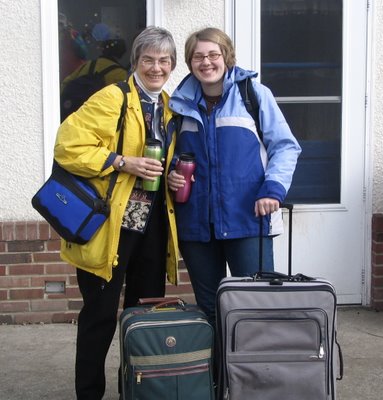 I drove Kate and Madeline to the airport this morning as they make their way to New York City over Madeline's spring break. Last year, Las Vegas. This year the Big Apple. Kate just called and they are on the plane. Adventure awaits!

Kate and Madeline's trip preparation and a bike ride I took yesterday with Peter got me thinking about one of the differences between people at 20 and at 50. As always happens when I ride bikes with Peter, I was slowing him down. He nicely waited for me for the first 7 or 8 miles, having told me that at some point he would ride on a bit faster and meet me at home. Before he increased his speed I asked him if he had a key to the house. He didn't. And it wouldn't have occured to him to think about a key until he got back to the house. Madeline packed for her New York trip this morning. Kate has been planning what to pack and where to go for weeks. 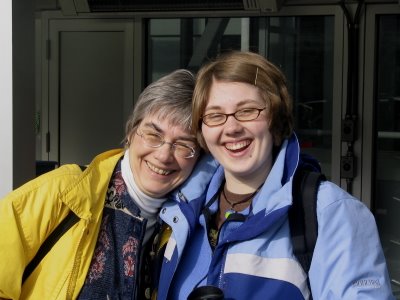 Kate's birthday was yesterday, and we really let loose! We went to the Home and Garden Show. Bought a duster and three spatulas! Came home and had a steak (in honor of Kate's birthday we had a Kobe beef) along with a very nice bottle of pinot noir. Put a pretty good dent in a second bottle as well. Watched a documentary called Stomp in High Definition. Got a good night's sleep. The thing was, it was a great time. Doesn't sound like much. But we had lots of laughs.

Then today things got even better. We were going to drive Kate's Jeep to the Jeep dealer to pay them to investigate a loud "thunk" sound that had arisen out of nowhere. We had taken the Jeep to our trusted mechanic Mike Glasgow - who couldn't find the source. So he suggested we take it to a Jeep dealer and see if they could figure it out. I could just smell the money going down a pipe. The thing was, as we were driving to the Jeep dealer, the "thunk" sound went away. We were so happy we went and bought another case of the pinot noir.

And as we were taking Greta on a walk on the University of Minnesota golf course, we had a delightful birding moment. Greta started pointing as we were walking near a wooded area and as we came up to where Greta was we were ten feet from a great horned owl, sitting on the ground next to a tree. 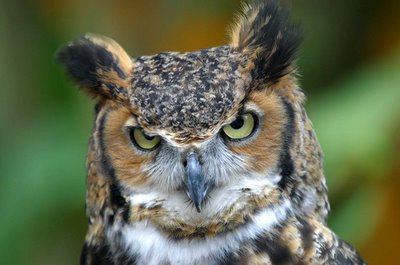 The owl puffed up his feathers to look ominous - big and scary. Greta quickly became uninterested, as she always does when she decides something is unlikely to be edible. And Kate and I had a few minutes alone with this magnificent bird. What a treat! As we walked on we became concerned that we were only half a mile from the Raptor Center, where injured raptors are often nursed back to health. We thought that this guy might be injured and released just a little to soon into "the wild." But by the time we made it back a half hour later, the owl had flown away. More good news. I should have told him where the crows hang out at night (see below).