In the spring we were visited at our house in the geographic middle of the Twin Cities by a wild turkey. On our return from the cabin last evening we had another interesting avian visitor. 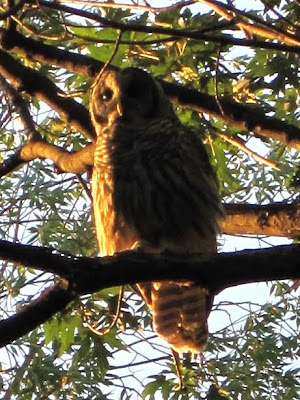 A beautiful barred owl. I watched him (and he watched me with much better vision) until it was too dark for me to see him or his shadow any more. I'm sure he had the capability if not the interest to continue watching me if he so chose. Doubt if he did though. I'm not as stunning an example of the human family as he is of the avian family. 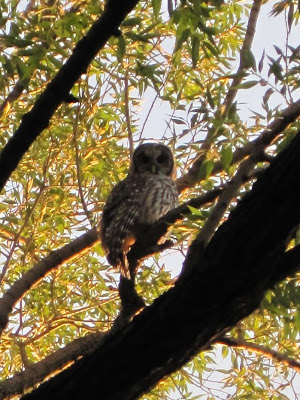 He (or she - though to me the bird seems like a he) was still in our yard this morning - though I only saw him in flight. I hope he takes up residence. And I hope he's a "mouser" and not a "birder." But if he kills and eats another bird I won't blame him. As Peter told me years ago after some life and death animal event (and after he had seen The Lion King), "It's the circle of life dad." I guess he thought Disney was a better philosophical source than his dad. Who am I to argue with that?

An afternote - Since our barred owl is still around after two days, Kate and I named him Shakespeare (though if he is in fact a she I will promptly rename her "Kate." Warning - this is a fairly abstract bit of bird humor. A hearty handshake to anyone who gets it).
Posted by Stan Oleson at 8/24/2009 03:23:00 PM No comments:

I guess we stay pretty much the same. Kate, the kids and I made the long drive to Pennsylvania to see Kitty and Bob about 10 years ago. This week we did it again. On the way Kate got an urge to go back in time and stop at a Howard Johnson's restaurant for a plate of the fabulous (at least in our memory) HoJo Fried Clams. Just before we made our way on to the Pennsylvania Turnpike for the final leg of our long journey, we stopped for lunch and as we headed down the ramp there appeared the distinctive HoJo establishment. As it had 10 years earlier, it proved to be a mirage - a hotel and not a restaurant. But it reminded us that last time we had stopped at the adjacent Eat 'n Park restaurant for what proved to be an odd but memorable lunch. The Eat 'n Park was a mess. We needed to clean our booth before sitting down. Then one of the people in the booth behind ours complained loudly that the bun of his sandwich was moldy. Not an inspiring thing to hear when awaiting food. When an employee passed by with a silent vacuum trying to clean the floor Kate commented, "They must be making Crumb Cake." An instant later when a bug flew by she added, "and ShooFly Pie." That started a laugh-a-thon that made the rest of the trip shorter. So did we return to the Eat 'n Park? NO! When we discovered the HoJo mirage we went to the relatively unexciting Subway and Wendy's. We may respond similarly to the stimulous of the road in a similar fashion - but we are capable of learning.

On the trip out we (Kate, Peter and I) spent a wonderful evening with Nate and Katharine in Iowa City. We worked on evolving what I for me is an alternative approach to paella, using the Weber and a few secrets. Since Nate is a professional magician - I will not reveal the secrets we discovered. 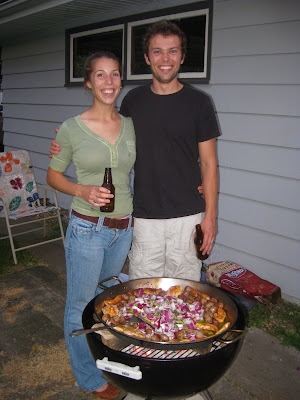 Humans are way too interested in reasons. Sometimes it's best to just let magic be magic.

Our time in York has been great. The big event was Bob's 80th Birthday celebration. We had a wonderful Saturday evening with Bob and Kitty and the Bobby and Linda Bowers family. 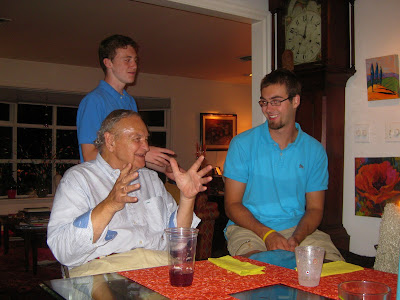 The major celebration was a Sunday Brunch at the historic Accomac Inn on the Susquahanna River. It was kind of a formal affair, so I got to wear the Coveted Maroon Jacket in a social setting. 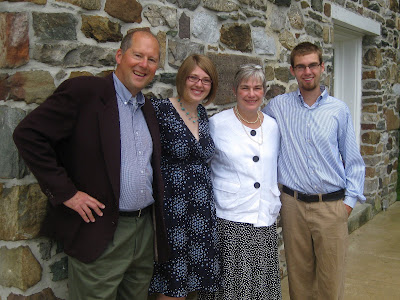 The kids (and Kate and I) got a chance to get reacquainted with their cousins. 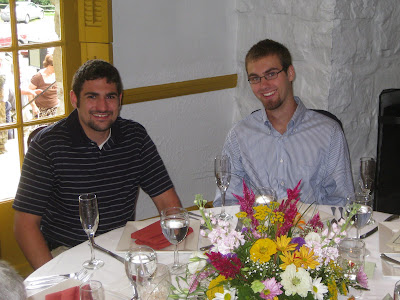 After many years of hearing stories of the Bowers clan, it was great to get a chance to meet most of them. 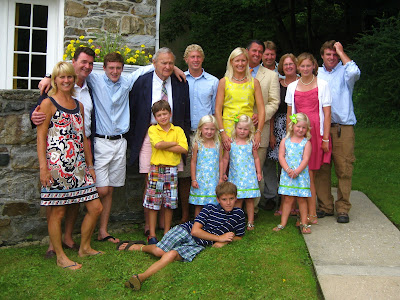 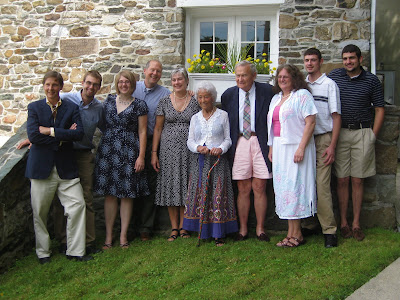 And after the party we got some informal time with Kate's sister Liza and her son Chris. 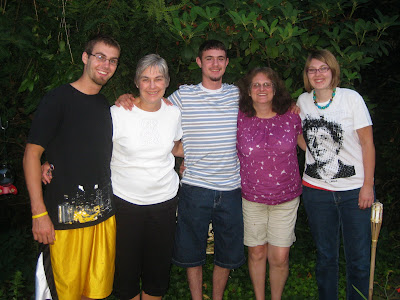 The big question is, on the long drive back on Wednesday, do we give the Eat 'n Park a try? I'd bet against it.

We did have a great tour of Gettysburg. Though we had been there in the past, it was always sans guide. This time, with the help of our guide Gary, we got a much richer sense of the battle. 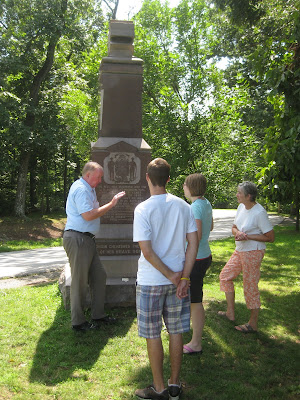 We also got a storehouse of facts, important in some cases, like the fact that the group with the highest percentage of casualties was the Minnesota First. 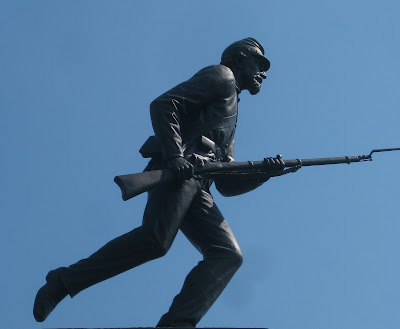 As you might imagine, we were more taken with the odd facts. The last Civil War widow died fairly recently. She was 18 when she married her 81 year old spouse. When he died, she married his grandson (from a previous marriage). As Gary said, "Odd, but not illegal."

We got a chance to see Kitty and Kate's long-time friend Ruth Craley (who now lives in Gettysburg). Ruth had just had her carport ceiling painted, hence the unusual angle of this photo. 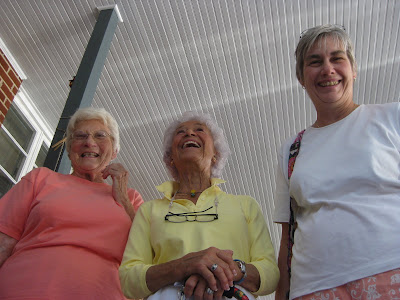 We think Bob enjoyed the Gargoyle we took him as an 80th birthday present (Kate's friend Michel's dislike of it notwithstanding). 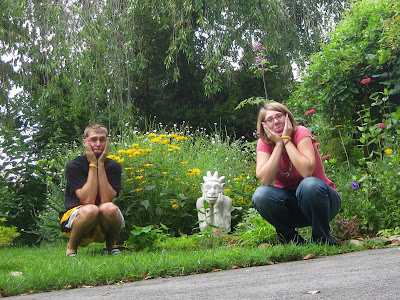 And I think he enjoyed the presence of the junior gargoyles as well. We sure did.

We also got to see our friends Max and Laura in Dayton, Ohio - after too many years of not seeing them. Lots of laughs with them. 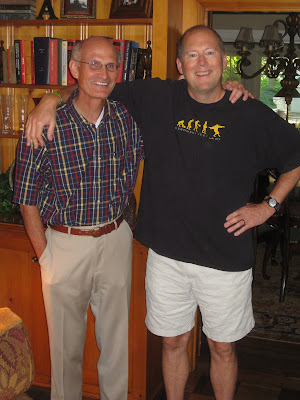 And it's always a pleasure to spend time with the Seymours in Peoria. Kathy is a great chef, 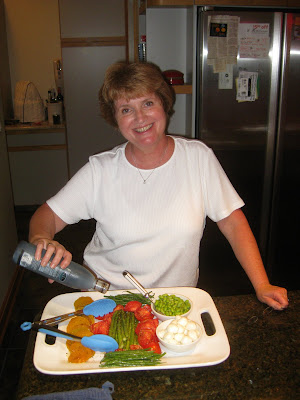 and Tom a great somollier/bartender. But the food and drink are not nearly as good or as important as the company. 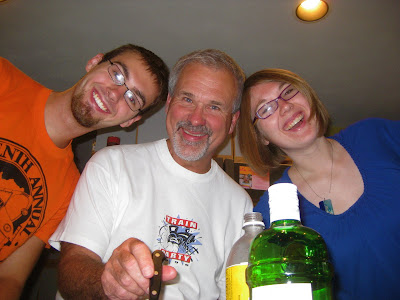 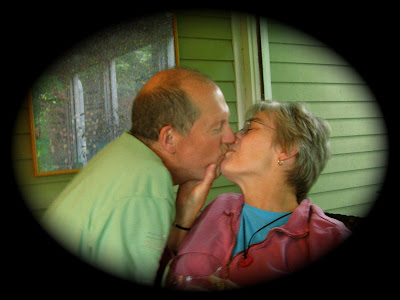 I got to experiment with Bower's style formal dress - though I didn't carry through and wear this dignified look out to dinner. 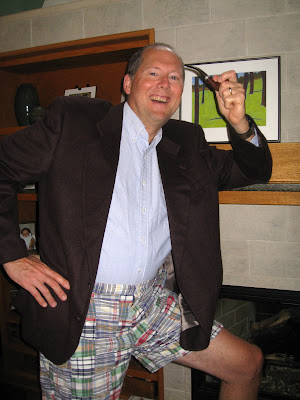 So, to sum up, 2700 miles is too much driving. But we survived and had fun on every step of the way. Lots of time together as a family - which is of great value. Lots of laughs. No tears. One broken camera (oops, it slipped - but a replacement was ordered this morning).