Sometimes perfection isn't all it's cracked up to be.

Kate and I went to a cooking class hosted by our financial advisors last Wednesday. Forty people or so - most acquainted only with our advisors and the person we each came with. A little wine, some conversation, a French Provençale-themed meal prepared and eaten by the attendees (with lots of supervision from the chef and several sous chefs).

The chef asked the group to gather round the main preparation table and then asked us to number off into six groups. Since most were standing next to their partner, the result was six groups of six who didn't know each other.

Kate was in the potato group - teaming with our friend Ann and with a former president of the University of Minnesota to prepare French potatoes with Dijon mustard and Kalamata olives. 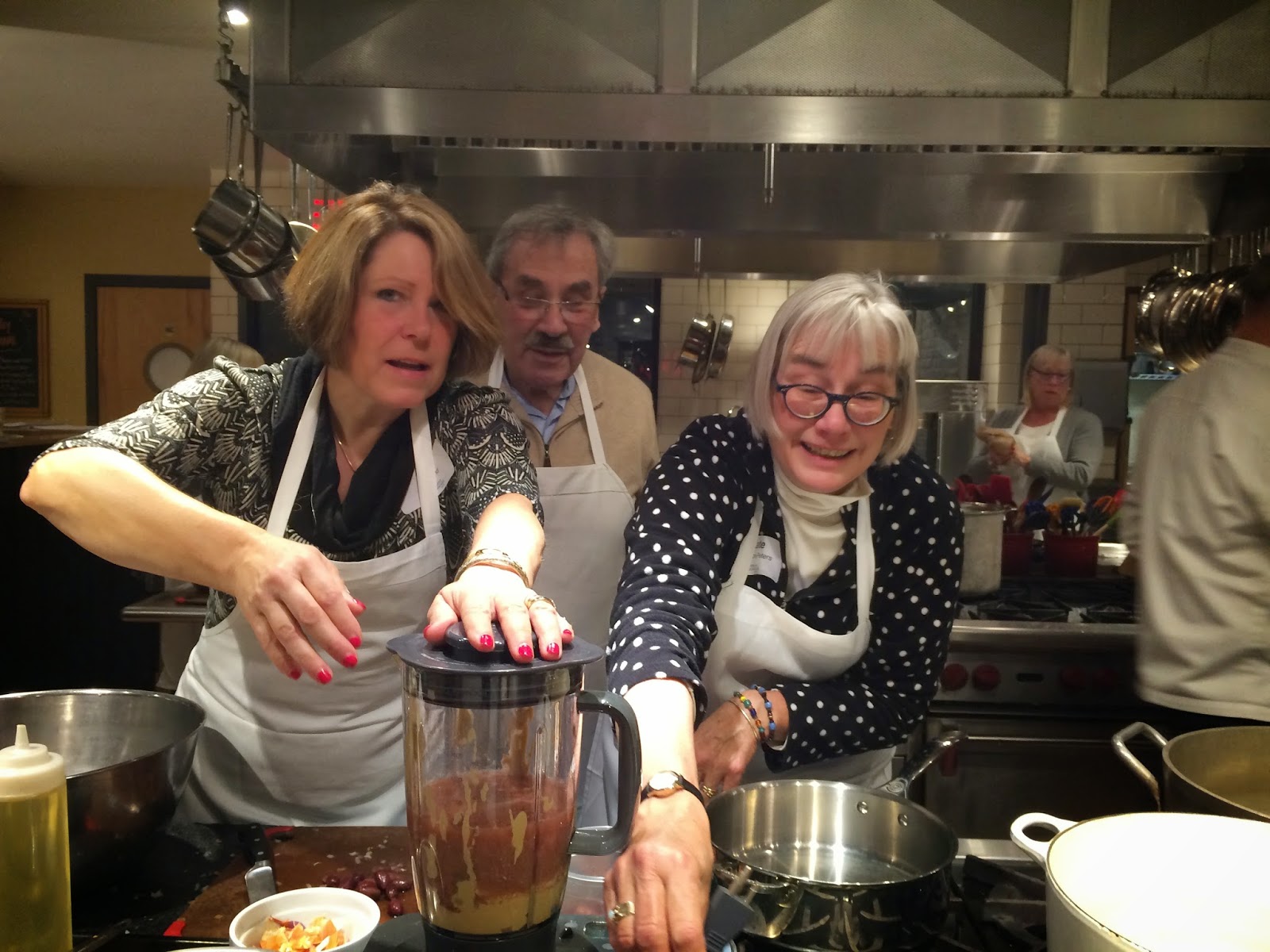 Her group seemed to be having a great time, with lots of laughter. 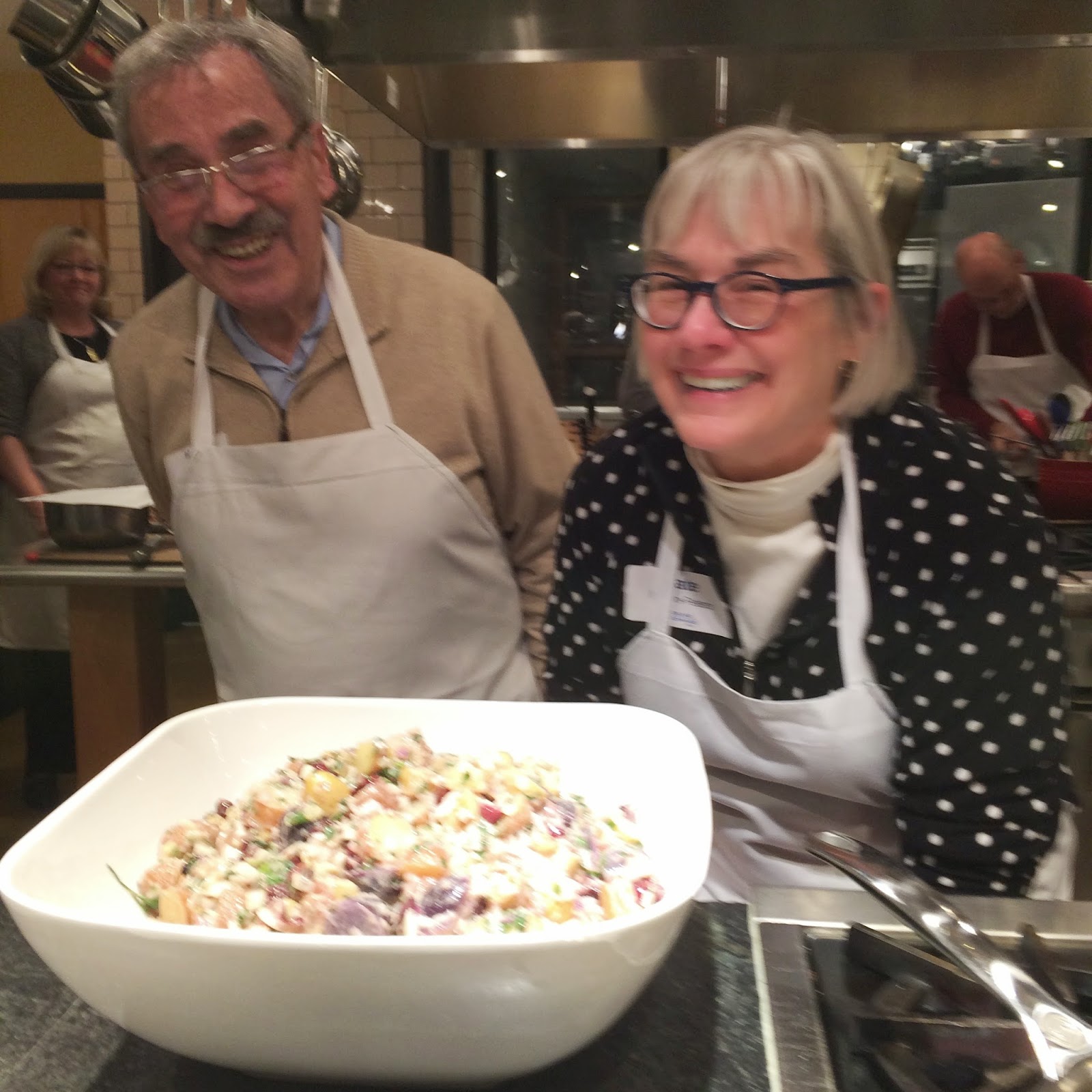 and the resulting dish was just beautiful. 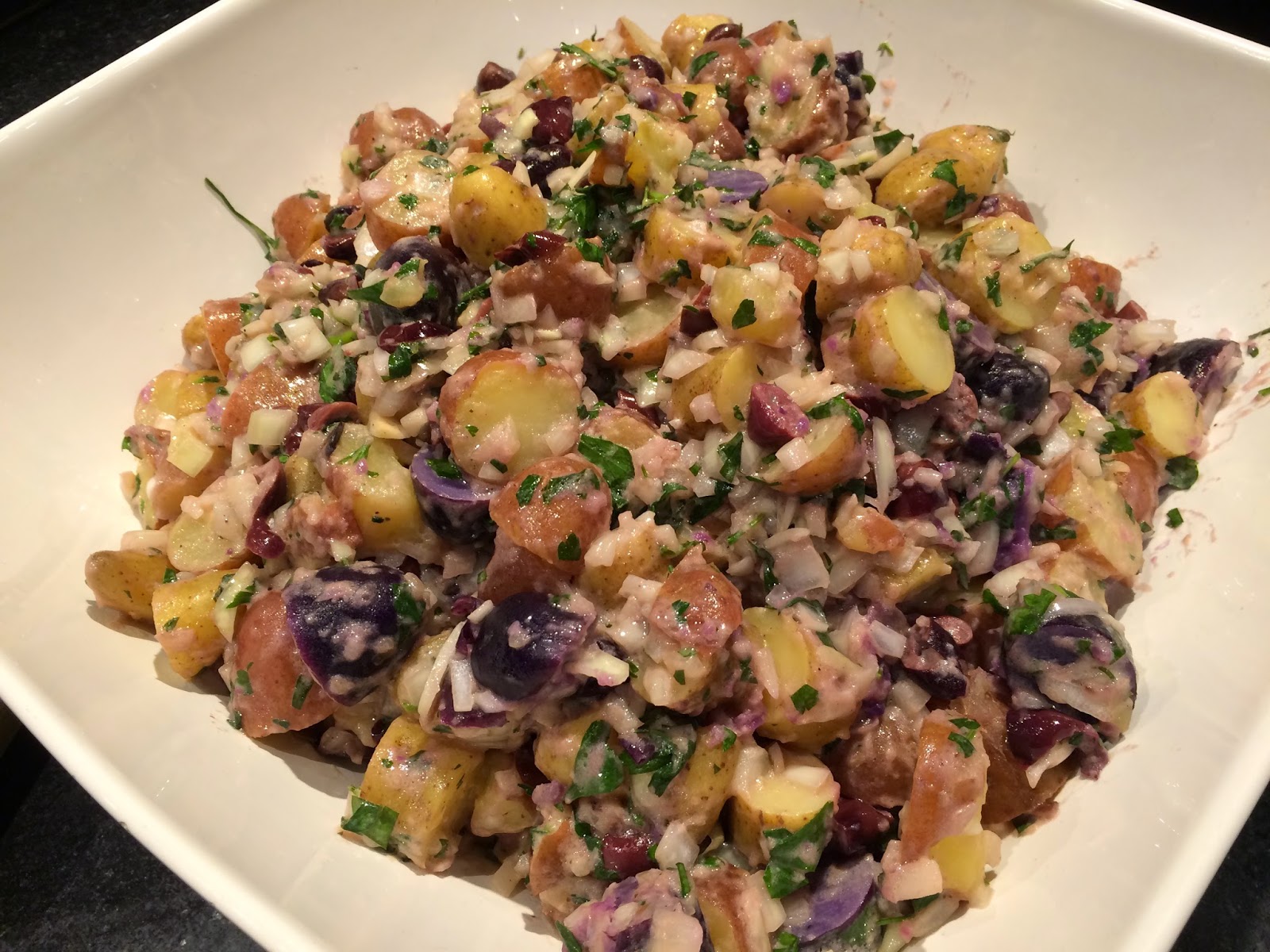 Our group of six was perhaps a bit less cohesive. We were charged with preparing the main course - Salmon Provençale. Two of our group seemed to be natural, if self-appointed, leaders. Take charge guys! Perhaps it was an odd mood on my part but one, a high-energy surgeon with one tear-drop earring and a "large" personality to complement his small frame, just wasn't a guy I wanted to share my Wednesday evening with. So I adopted a reduced role as a red pepper dicer, garlic peeler and basil preparer, all of which would go into the sauce which would cover individual pieces of salmon, sealed in parchment paper and oven baked to a moist and tasty perfection.  Meanwhile, I carried on a pleasant conversation with Susan, another team member. 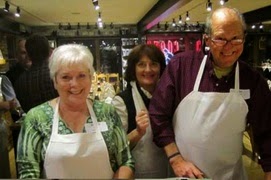 When the sauce was prepared it was time to put the salmon in the parchment paper, add the sauce, fold, seal and bake.  To facilitate preparation, we put the sauce in a metal container about 12" high, filling it with sauce to a depth of about three or four inches.

A little background here. As anyone who knows me will attest, I am fond of puns. Though it is often reviled by the unwashed masses, the art of punning requires cleverness and quickness. A pun uttered feebly a minute late is no pun at all. I know I should have devoted my life to curing cancer or stopping thermonuclear war. Instead, I've spent it refining my quick-response verbal skills to better enable me to make all manner of puns, double entendres and quips. Add to this the fact that I spent last "weekend" with the boys in yet another five-day, no holds barred verbal jousting session. So my verbal reaction time was fast. Very fast. 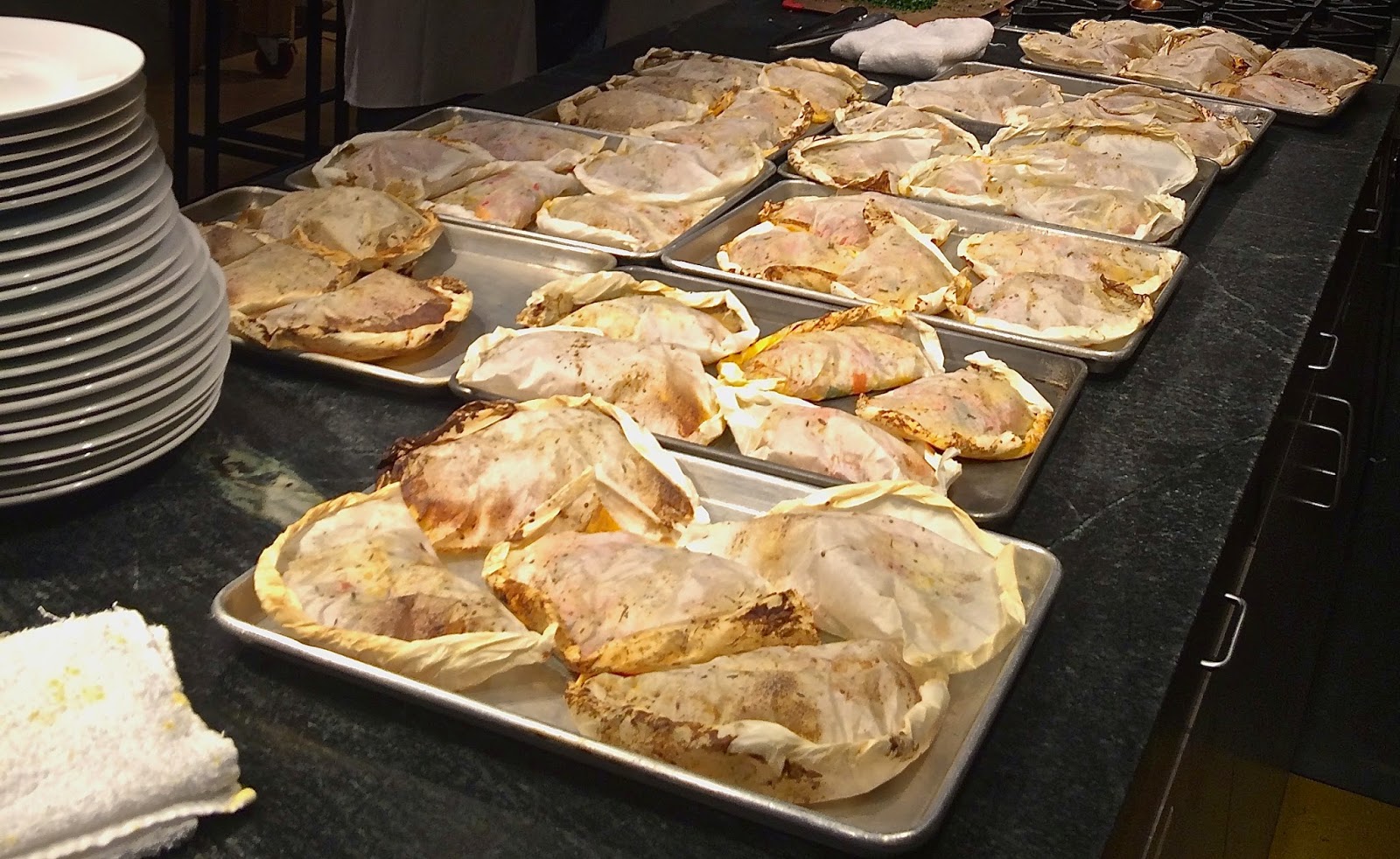 As our team was putting salmon and sauce into parchment paper, I had the aforementioned sauce container, which was making its way around the group. The take-charge surgeon, urging the team to complete our mission, had inserted himself on my right. I was passing the container to the right, holding it by the top, where the metal was warm but certainly not hot. As he prepared to grab the container from me the surgeon asked me, "Is this hot?" I replied no, though admittedly a more complete answer might have been appropriate. Whereupon he grabbed it by the bottom, which was of course quite hot since the heat from the sauce was transmitted directly to that part of the container.

A couple of yelps later he exclaimed "You said that wasn't hot?!?!!" I responded that it wasn't, if held in a logical manner. He responded, "Are you saying that lawyers are smarter than doctors?"

It was here that a measured response would have been in order. Perhaps it was the wine, or the previous weekend with the boys, or just that I love a verbal joust, or the fact that I didn't view this as a confrontation between two professions. Whatever the case, I responded, "No, I am saying that I am smarter than you."

This was exactly the perfect response, at least it was if my goal was to express clearly what I was thinking. With two weeks to ponder and consider, I couldn't have improved on either the response or the timing or the inflection. Still, the momentary hush that "fell over the crowd" made it clear to me that a bit of verbal restraint had been called for and I had failed to employ it. The moment passed quickly. To his credit the surgeon let it go. And I still can't quite decide whether to be proud or ashamed of my response. I'm probably both, if I'm honest about it.