During the last week I've had a higher than normal interest in medical test results. My most personal and intense interest was in my routine quarterly blood tests. The results of which came in slowly, but were fine. After nearly 8 years, the blood tests still are stressful. For 11 weeks between appointments I don't worry unduly about cancer. Then the 12th week rolls around, my blood is taken, and a part of my mind is always focusing on the test results. This time the more complex (and important) tests were sent out for analysis. Resulting in 3 days of wait and worry and wonder. The folks at Minnesota Oncology are great. But that time passes slowly. And it's amazing to see and feel the physical manifestations of the stress - more tightness my back, etc. And to feel them go away when the results are normal - which they have been for many years now.

But I've also spent lots of time over the last week reading and listening to everything I can about Floyd Landis, and testosterone and epitestosterone ratios. The Tour de France is my favorite sporting event (except perhaps the NCAA basketball tourney). And this year was the best Tour ever. Lots of amazing stories. The result in question right to the end. Phonak 'giving' Perierro a 30 minute lead on the assumption that he couldn't compete in the Alps. And nearly living to regret that assumption. Landis being great on Alpe d'Huez, necrotic hip and all, and then cracking in the 16th stage the following day. And then the amazing breakaway ride on the 17th stage. I think I was most impressed with the class Floyd showed throughout. After his terrible stage he came down and was interviewed - and he did it graciously. He certainly didn't have to make an appearance. And I have to believe he would have preferred not to. I was so pleased that he won. 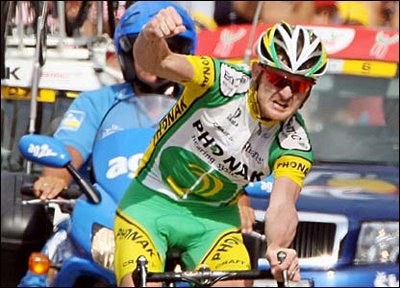 And then the results of the test after the 17th stage. It's hard to know for sure what to think. But after listening to interviews and reading, I'm inclined to believe Floyd is telling the truth when he says he didn't take testosterone or other performance enhancing drugs. Maybe I'm naive, but I believe him. For one thing, he seems intelligent. Too intelligent to choose to take testosterone if he was going to cheat. As I understand it, the logical use of synthetic testosterone is over a period of time - not as a one shot deal. And the results of the other tests taken during the Tour were acceptable. Then there is the WADA and UCI politics, and the guilty till proven innocent aspect of the deal - with only a limited opportunity for the cyclist to represent himself. But mostly, it's listening to Floyd himself. His comments don't sound like a fake denial. To me, his responses have been responsive and ring true. I hope I'm right.

By the way, the funniest thing I've heard on this subject came from my friend Charlie who, upon reading that beer consumption can increase your testosterone levels, said "well, that explains NASCAR."

The other sporting event I've spent lots of time with these last few weeks was the World Cup soccer tournament. I'm not a soccer fan. But the pressure and the great fans were fun. And the athletes are outstandingly talented. I guess my objection isn't exactly that there is not enough scoring. It's that the results seem entirely too random to me. The best team is only slightly more likely to win. Oddly, I really liked the German team. And really disliked the Portuguese (they seemed like tank artists to me - falling as if they were hit by sledgehammers when the replays tended to show they were barely touched). And by the time the finals rolled around I was rooting for the French. 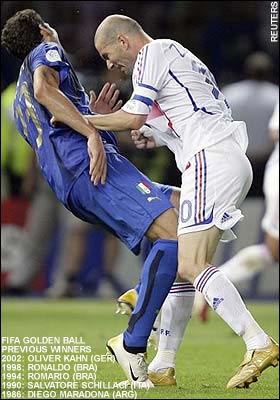 And then there was Zidane's "header" on the Italian player. I thought it showed that he was a soccer player to the DNA level. When he got pissed at the defender, he didn't punch him - as any American kid would. He planted him with a header. Right to the solar plexus. I was interested to read a few days later that Zidane was given a 3 game penalty and the Italian defender got 2 days. I wonder what he said. Because it must have been something.
Posted by Stan Oleson at 7/30/2006 01:19:00 PM 2 comments:

It's a wonderful year in the gardens at our house. Kate and I wanted to share the views (ok, here's the deal. Kate asked me to take some photos of the garden and post them on the blog. I like the gardens, and I love Kate, so here are some hopefully patriotic photos of our garden taken on this Independence Day. I realize I'm not showing a lot of independence here, so no ironic comments on that subject, please).

Here is the back garden, presided over by Solomon, a gift sculpture from our friends the Seymours. 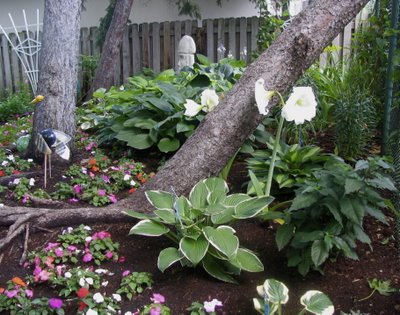 Note the amaryllis plants which Kate "forced" to bloom a second (and third) time. 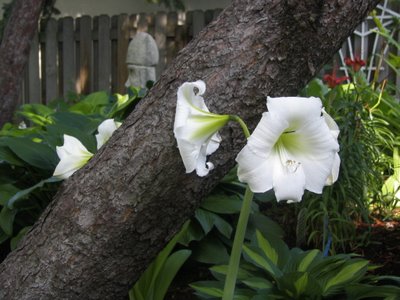 The lillies are a special favorite of mine. 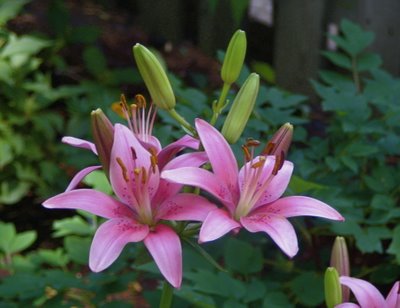 And Kate is particularly fond of this "new and improved" coneflower. 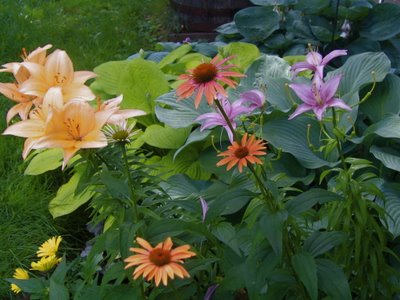 Back In The Tropics 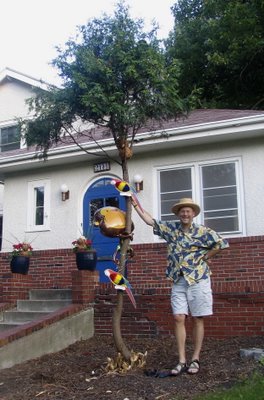 We just returned tonight from Peter's college orientation and from another fabulous Train Party. It was good to be back in the warm tropical Minnesota climate. Apparently some local parrots and monkeys agreed with me that the tree I left in front of the house looked like a little palm tree waving in the breeze. During our absence they have taken up residence in our front yard.

It is always fun to be at the Train Party with such a great group. And this year Peter won the Golden Platter Frisbee Golf Tourney. Art and I won the Bocce Tourney. So Peter and I brought home some nice hardware. 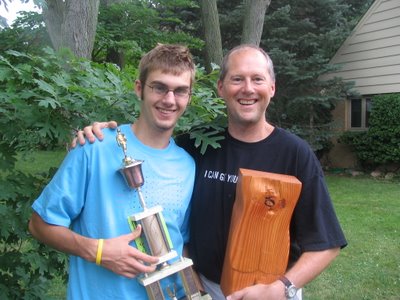