Mssrs. Seymour, Green, Lack and Oleson have just returned from a great canoe trip to East Pike - a Boundary Waters lake that is near and dear to my heart, and to Wein's - it being just a mile or so away from McFarland Lake, where Wein's grandfather built a cabin in the '30's. 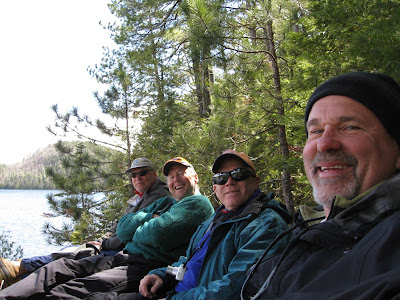 As we left Saint Paul for the northland, we thought we were embarking on a bit of a fishing contest. If it was a fishing contest, it was similar to an early season basketball game between a powerhouse and a Division III team. 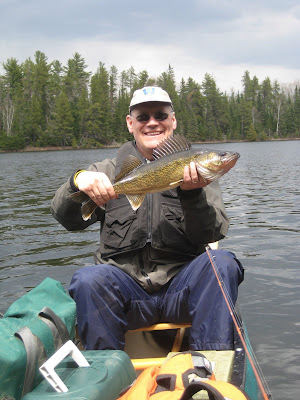 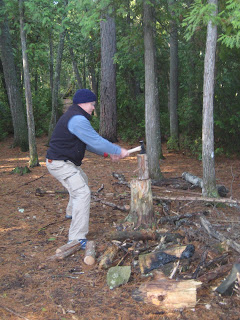 Mr. Green established his bona fides as a woodsman with the most stunning display of firewood location and chopping and splitting that I have seen in my nearly thirty years of trips to the Boundary Waters. He and Mr. Seymour produced what seemed to be cords of finely split wood which allowed us to enjoy evening fires. This was particularly nice, since last year we had been unable to have camp fires due to a fire ban.
This meant that the rest of us were unaware of this amazing Bunyanesque skill. If Barny is the "king of the onion" - and he is - Wein is the Hatchet Man.

The area was, as always, beautiful. This is one of the great places for feeling close to nature. 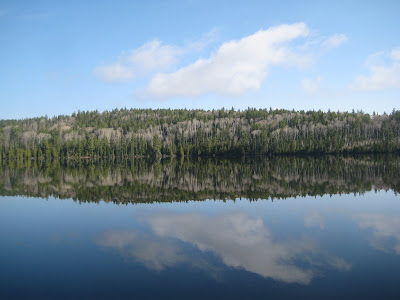 The weather was more variable than I have ever seen it. Sun would be followed by rain then more sun, and even a little rain/snow/hail mix. 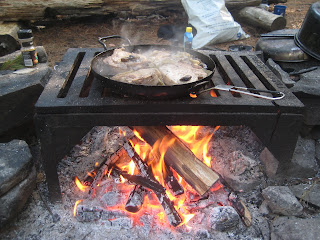 The wood produced by Mr. Green and Mr. Seymour, combined with the patented "Stan Oleson Maxi Pack" technique which allows for massive provisions, allowed us to dine like kings and snack like large men. With a sommolier like J. Thomas Seymour, the libations were beyond unbelievable. A fish stew Curt and I made of three large bass snagged from East Pike, some potatoes, onions, portobello mushrooms, and various other bulky but tasty ingredients stands out in my memory. The steaks were great, Curt's pan fried northern and smallmouth were, if anything, even better. The final breakfast fare was a giant pork chop - again with portobellos and onions. It's a dish that I am still refining. When the Hatchet Man (who likes meat cooked more fully than I do) is along, I have now resolved to grill the chops over the fire he provides and cook the mushroom sauce separately. This will allow for better "a la carte" presentation of the meat. 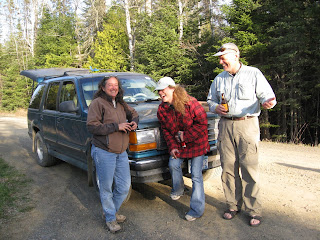 As this food preparation example illustrates, trips to the BWCA invariably involve some problem solving. This year, Curt helped ensure that was the case. Due to Curt's newly developed bull moose canoe entry method, he and Wein failed to "mount up" properly for an evening fishing junket (while Mr. Seymour and I elected to lounge around camp sipping on a "splash" and taking in the scenery from terra firma). The result - a quick dip in a lake that was covered with ice three days before - went beyond bracing. At least the solution was obvious. Less obvious was the solution to our problem on the "dismount." It was then that the car door locked with the keys on the front seat and in a backpack in the rear of the car (a safety feature that we all agree Acura could dispense with), we found ourselves 17 miles up a gravel road to nowhere (though an amazing chunk of nowhere) and 35 miles from cell phone service. At this point Curt's preternatural skills kicked in. He fired a pheromone (or perhaps it was a Farrah moan) and summoned two nice women who provided transport and phone cards and other necessities in aid of Curt's location of Bud the Locksmith and Storyteller, who arrived on the scene a hour or so later. Like magic, in 46 minutes Bud had the door opened (with liberal amounts of "help" from the assembled laughing masses). At this moment the 2 a.m. return to Saint Paul dampens the humor just a bit, but I think it will be a rich source of humor for years to come. 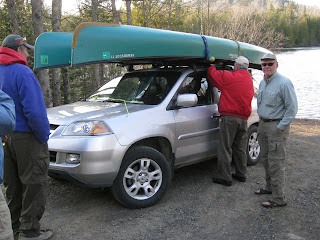 A great trip. Planning and pondering for next year has already begun. 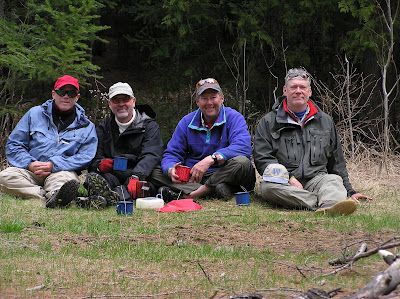