The Stars Are In Alabama

Road trips haven't been our family's norm. But this year we decided that logistically it just made sense. So we loaded up the rented van and headed to what is euphemistically referred to as the "Redneck Rivera." Because of our inexperience, we fell prey to the "bring it along - we've got a van" mentality. It did bring back some memories to look back and see the kids in the back of the van. 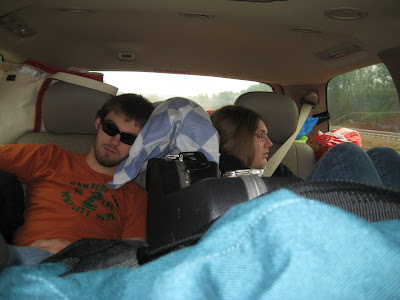 Our "new" car is a '99 Blazer. So the Chevy Uplander rental van was a nice upgrade. While the drive was a long one - we had the ability to play music from our iPods without those goofy fake radio transmitters that never work. And, though I was unable to figure it out immediately, there is even a DVD player for the kiddies in the back.

We pushed hard the first day, but still didn't get to Memphis until 9:30. It was the picture in my head to get to Memphis (it just sounded more interesting to me than Cape Girardeau, Missouri). I was letting go of the idea, but Kate had the drive to drive on. I was so glad. We went on for a late night dinner at Rendevous Ribs. Made it there just before 11, as the place was winding down. But had some great ribs, and really enjoyed the atmosphere. 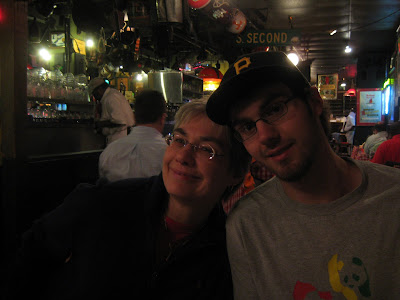 We even wandered Beale Street for a while. Amazingly, we were caught in a very short hailstorm. Then it was off for a quick rest (and a lecture to me about snoring) and on through Mississippi.

We were traveling in a loose tandem with our friends the Grays (who were about 90 minutes behind us aiming for the same destination). Kate did one of the funniest cell phone calls I've ever heard from M-I-S-S-I-P-P-I to alert the Gray's of the local driving style - which features, among other quirks, a quick cut in front of a passed car within 5 feet of their bumper.

We picked this destination mostly because it was the closest ocean to Minnesota. But it's really beautiful. And our beach house is really something! 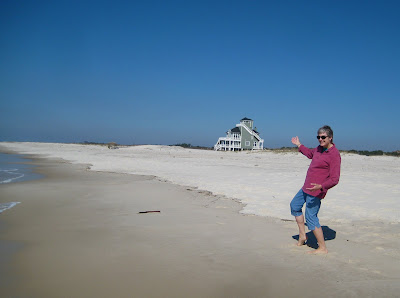 O.K. - that's not our beach house. But ours is really nice. The beach is a beautiful white sand beach. The four of us took a long hike to the end of the spit of land we are on. For the first half mile or so there were beach houses and lots of people (the pictured house is the last one). But for a couple of miles thereafter, there is nothing but beaches and dunes until you come to Fort Morgan. And, as is so often the case, it really just takes a small amount of effort to leave the crowd behind (the crowd isn't that big in the first place - though where we would toss a Frisbee, they toss a football - "Roll Tide" seems to be a good icebreaking opening line).

Such a nice time sharing laughs with our family, as we passed stranded jellyfish 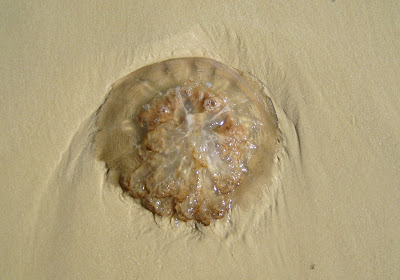 and surfed our way along the beach. 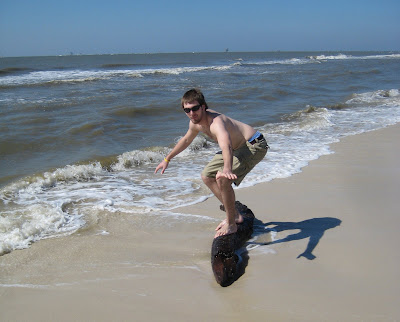 Just a great family time. I'm not even dreading the drive back. . . yet.

There has been a strong wind blowing the last couple of days. Strong enough that we've taken our beach walks headed into the wind first. Today (Tuesday) started cloudy, but turned to a beautiful, bright sunny day. We've just been taking it easy. Reading a book in the sun. Walks. A beer here and there. I've taught Peter to play cribbage - and so we've had several games.

Last night we had dinner at the house being rented by our friends the Grays. It's five miles up the road. A quiet road, but nevertheless I decided to take it easy and limit myself to one glass of wine. I know you are thinking, "Hey, it's a vacation. Loosen up!" But I am strict about those things. Here's a photo of Kay and Reechow pouring my glass of wine. 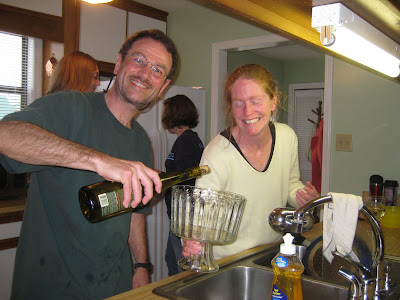 You have to have principles!
_______________________
There is a reason I like the ocean so much. Change is so palpable here. The tides go in and out. The wind and water move the sand around with a force that is both constant and inexorable. What yesterday afternoon was this 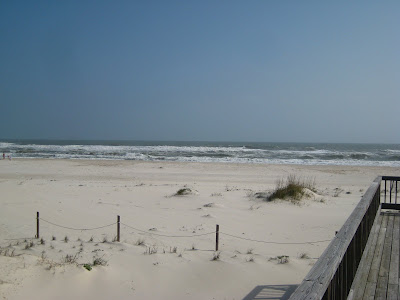 this morning is this 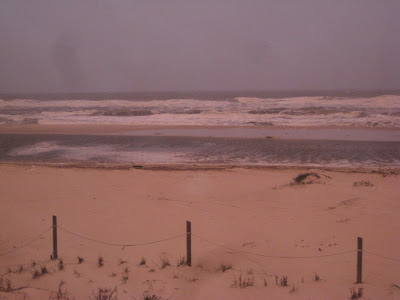 The water is 200 feet closer to the cabin and there is a storm on its way. I'm looking forward to its arrival.

I like to go to the ocean to remind myself of the constant change that surrounds me. Books like Beak of the Finch and just living have taught me intellectually that change and evolution are always happening. They are more apparent when they are directional over long periods of time (for example, apes to humans - sorry Mike Huckabee). Some changes we label as good, some bad. And some are good and bad. But most just are. I need these reminders.

One of the huge challenges of growing older is that it seems harder to accept change gracefully. Probably it is harder. It's so easy to fall into the pattern of saying "I remember when" romanticizing the "good old days."

It's been suggested to me that I am a "cheerleader" for globalization - lauding the smaller world we now live in. Perhaps that is somewhat true. But I think, or at least hope, that what I've done is accept the change inherent in the communication revolution we have all experienced over the last decade or so. Accept it or not, it's there and it's real. Better to accept it and take advantage of what it offers.

I think my understanding of that particular change happened most powerfully for me when I worked at the expedition. I was writing an electronic newsletter to be sent to the 4,000 or so people who were following the expedition's preparations. I read and reread the email and then hit the "send" button - wondering if anyone would be interested. In five minutes I had a response (several in fact). But the one that hit me was from a woman sitting at the South Pole station. I exchanged several emails with her over the course of the day - she in probably the most remote place in the world from my little office in Minneapolis.

On a different note, we went out to dinner last night. Our skills in restaurant selection need some work. We left one restaurant since we didn't want to sit through a 45 minute wait, only to drive to another restaurant with a less enticing menu 15 miles further away which also had a 45 minute wait. I happened to catch a photo of Kate at just the instant we were finally called to our table. 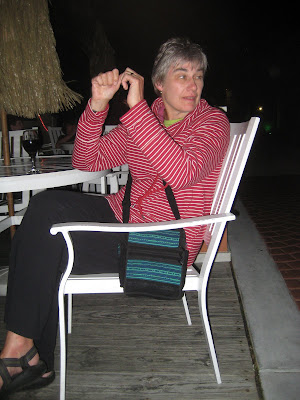 Now there is a woman who knows how to accept change. 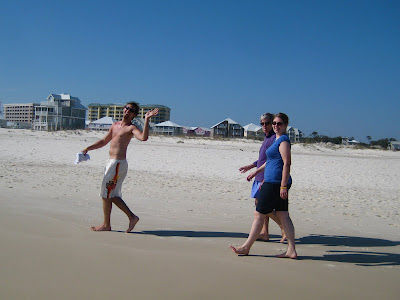 And it's "back to reality." 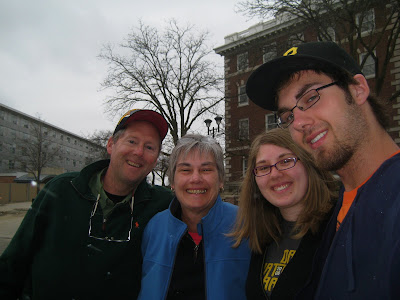 When I'm not thinking of politics (see below) or working diligently, I'm pondering the sauna. Here's a quick tour: 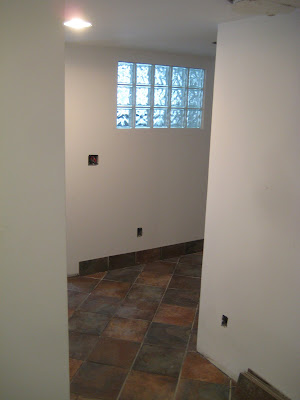 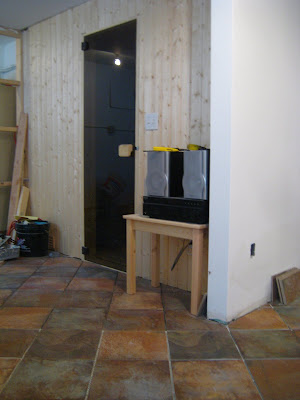 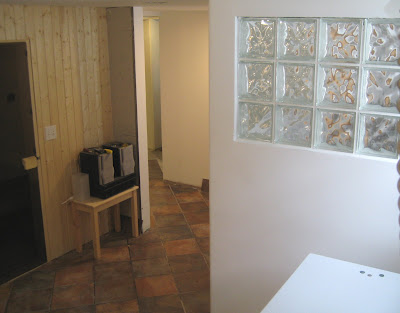 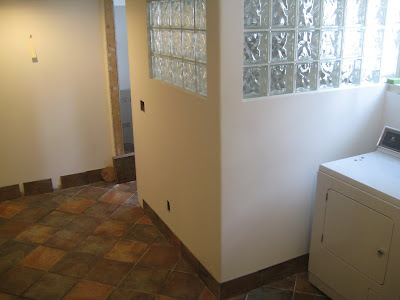