End of an Institution

I eat one chili dog a year. Or I guess I should say I ate one chili dog a year. At the Minnesota State Fair. At a place called “Jim and Jo’s”. A chili dog with onions, some sort of ersatz cheeselike stuff and liberal amounts of Tabasco sauce. You can bet that I told the person creating my Jim and Jo Chili Dog that it was my one chili dog of the year, so make it a good one. But they would have anyway. Most years, my annual chili dog was the last thing I ate before heading home from the fair. Madeline and Peter often ate one with me. Sometimes shared one, though it was one fair food item that I was reluctant to share. 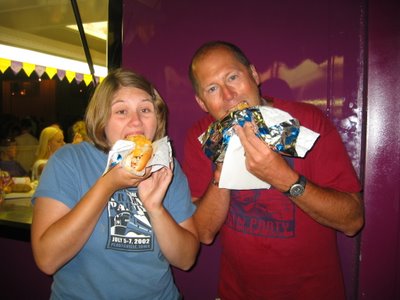 My buddy Richard, who joined me for a Jim and Jo’s chili dog one year, was so moved by the experience that he wrote a poem about it, which I reprint with permission:

from a trailer hard by the midway.
limeade is the only drink served – and is
“made with spring water”.

while the midway has lost its burlesque (lap dancing having
gone mainstream), its freak show, and even its fat lady –
jim and jo’s have soldiered on
in a crusade against… bad chili dogs.

and this may be more noble than it sounds.

foot longs with everything: chili, cheese, onions.
you may add ketchup and mustard
if you must
but jim & jo won’t. in the same way a
barkeep in London refused me a “black and tan”
years ago – “take your bleedin’ tourist ass else-a-where’s.”

the only condiment proudly offered is Tabasco;
the one and only god worshiped here at jim & jo’s.
the one god that has not abandoned us -
that still revels in pain as pleasure,
that knows Eve
knew not
and doesn’t care.

Oh Tabasco! you bastard, you
sideshow shill, you huckster extraordinaire,
bless this frank.

then Jim, grinning through a cloud of foul cigar smoke,
surveys his supplicants,
and, wiping his greasy hands on his pants,
counts all the chili stains 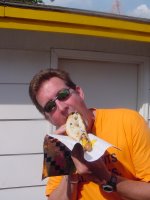 Was a Jim and Jo’s chili dog great food? I don’t suppose you can really say that. It was a great chili dog – because at least to me a chili dog is more about the experience than the food. Kate, for whom food quality is paramount, devours a Donna’s Pork Rib Sandwich at the fair but for the most part leaves the chili dogs alone. She’s right that a Donna’s sandwich would be good food anywhere, even at a restaurant with a tablecloth. A Jim and Jo’s chili dog would be out of place. It’s all context and situation with a chili dog. Until this year, the Donna’s sandwich was my alpha food – beginning the state fair eating experience. The Jim and Jo’s was my omega food – admittedly without any Omega-3’s, at least as far as I know. 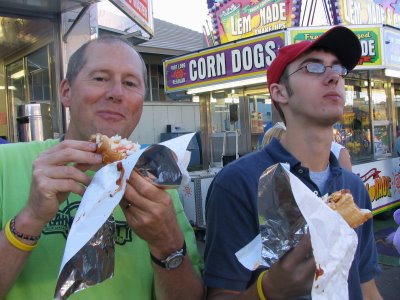 And this year, as our abbreviated fair experience was winding down and I went for my chili dog – Jim and Jo’s was gone. According to my sources, it fell victim to an administrative snafu. Both Jim and Jo have died. Their children were carrying on the stand, I’m told. And now, after 60 years, Jim and Jo’s is no more.

Change is always hard. But I usually deal with change pretty well. I believe, along with most Buddhists, in the concept of impermanence. I think I even understand it somewhat. Things do change. Inevitably. But I find it easier when the thing changing is a computer, or a style or even me. Not an institution. And Jim and Jo’s didn’t evolve. It just wasn’t there.

What wasn’t there with it – at least for me? Memories of my mom making me 3 or 4 or 5 chili dogs when I came home from work at Hy-Vee at 9 p.m. in the late ‘60’s. The fun of the years when I would spill a little chili from my Jim and Jo’s dog on my running shoes. Accidentally the first time. On purpose thereafter. Just for a laugh. Peter never joined in that tradition. He respects his shoes. Does he understand that things change, including shoes? That a chili stain can be an amelioration, not necessarily a degradation? 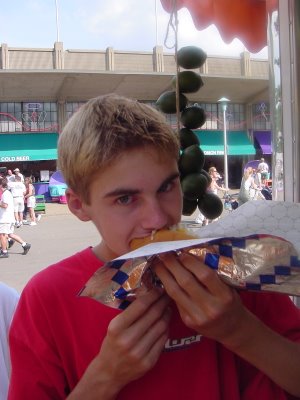 Will I seek out another chili dog stand at the fair to replace Jim and Jo’s? No, I won’t. It appears that my chili dog days of summer are over. I’ll shift to a turkey leg or a smoked pork chop as my Omega food at the fair. Or I’ll have another Donna’s sandwich to end the day. My state fair traditions will evolve in some way. But I will always wish that Jim and Jo’s were still there, providing me with a “link” to my past – and a little heartburn on the side.
Posted by Stan Oleson at 8/30/2006 07:22:00 AM 2 comments:

It’s been a strange last few weeks for me. I think someone wrote a book decades ago called “Passages” – and this is one for Kate and me. For we are now what is referred to as empty nesters. I helped Madeline move into a new apartment two weeks ago. That wasn’t such a change – she lived in Madison this summer, though she was home quite a bit. Or was she? She was in St. Paul, which I hope and think she still thinks of as home. But in some real ways Madison is her home too. 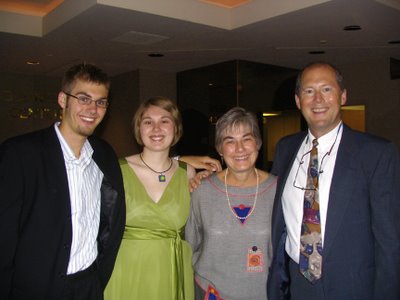 Then a week ago we took Peter to Iowa City as his college career began. I love both Iowa City and Peter (not in that order), and I’m excited for him to get on with what should be a great time of life. I think college will be a great experience for him, as it has been for Madeline. And as it was for me. Still, it was a strange moment when he was moved into his dorm. There is so much you want to say, and so little you can say. You want to help the right amount, while acknowledging that he really doesn’t need much help. 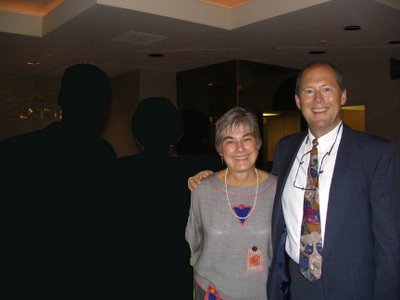 So Kate and I headed off down the road as empty nesters. In one sense, Peter had failed to do his job. College bound kids are supposed to foul the nest. To be so obnoxious during the summer before college that their parents can’t wait to be rid of them. Yet he has been particularly pleasant this summer. Sure, he was slow to write thank you notes for graduation gifts. But the ones he wrote were well written, and in the end they did get written. Maybe not on the schedule a 53 year old would choose, but on an appropriate schedule for an18 year old. Most nights he got home in the wee hours. But he frequently stopped by the house during the hours I was awake. And he’d sit down and watch the Twins and b.s. with me. Or go to a movie. More often than usual. Maybe that was his way, and mine, of saying something.

Anyway, it was hard to say goodbye when we left. Still, I’m looking forward to life as an empty nester. Kate and I will find lots of fun and joy and laughter. And we’ll welcome our “fledged” children back to the nest for visits and summers any time.

And speaking of fouled nests, we arrived at the cabin last night to find that what Peter had failed to do at 2134 Carroll, nature had done at Cranberry Lake. There was a huge storm here in mid-July. Blew down a couple of trees in inopportune spots. That is no problem. An opportunity to use a chain saw to create wood for the sauna. However, the wind blew the shingles off of about half of the roof of our bedroom. And every rainstorm since, including the one yesterday, has saturated the walls, ceiling and floor. 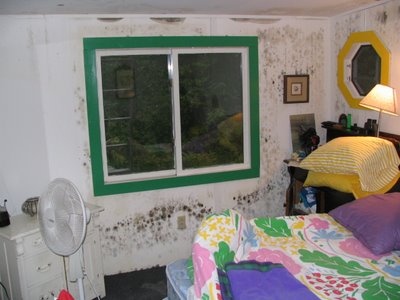