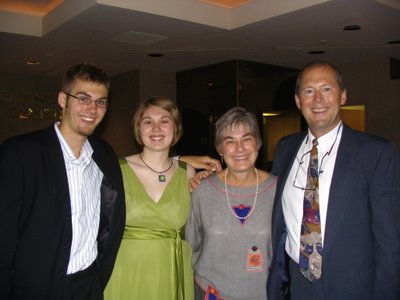 2006 has been a great year for our family. Along the way we've made a number of discoveries that we thought we would share in this Second Annual Official Holiday Blog-Card. 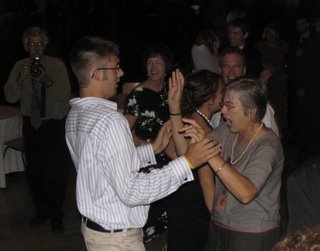 At a lovely summer wedding we discovered that Peter and Kate are a couple of dancing fools. Disco fever has never died out completely in Kate. The prevailing comment at the wedding was that Peter must be adopted, because no child of Stan's could possibly display that much poetry of motion on a dance floor. 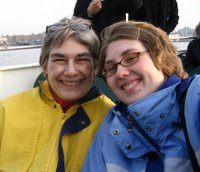 Kate and Madeline discovered that $24 no longer buys the island of Manhattan as they travelled to New York City for Madeline's spring break from the UW. They loved the theater, the museums, the people watching and the time together. 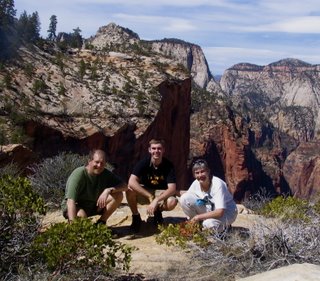 In April, Peter, Kate and Stan discovered the wonders of Zion National Park and the American Southwest. We spent the better part of a week hiking Zion's various trails. Peter was the only one of us to complete Angel's Landing, but all three of us had a wonderful and thought provoking time exploring this marvelous country. We also stopped in Las Vegas on Peter's 18th birthday on our way back. There were no stories that particularly need to stay in Vegas, but we did enjoy the Blue Man Group. It was great fun to spend a week together. 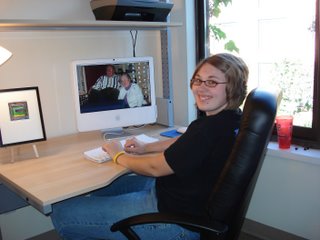 After reading a paper she wrote on her educational philosophy, Stan and Kate discovered that Madeline has a thoughtful and refined philosophy of education which will no doubt prove highly valuable to her when she embarks on her teaching career. Unfortunately, her professor was initially less impressed. Madeline discovered that even Professors of Education can be arbitrary and capricious on a bad day. Another valuable lesson - especially since everything turned out fine. 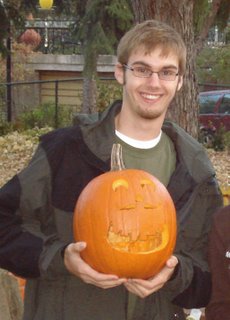 Peter has discovered the joys of college, and an academic environment that involves less busy work and more interesting learning. The University of Iowa seems to suit him very well, both socially and academically. In a perfect world, it would be nice to have both Madeline and Peter about 2 hours away. Instead it's over a four hour trip to Iowa City or Madison. But the world is smaller than it was when we were in college. With cell phones and iChat, Kate and Stan can feel more connected than we otherwise would. And Stan has discovered that providing requested help on papers and other projects is so much more enjoyable than the daily "is your homework done?" hectoring. 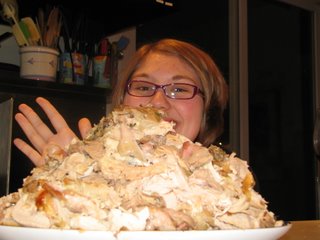 At Thanksgiving we rediscovered that 24 pounds of turkey is more than enough for a family of four. Yes there were leftovers. It was great to have both kids home for the Thanksgiving holiday. Madeline, Kate and Stan even attempted the dreaded Friday After Thanksgiving 6 a.m. shopping extravaganza. Please remind Stan that he discovered that he never again wants to experience the joy of this tribute to consumerism again. 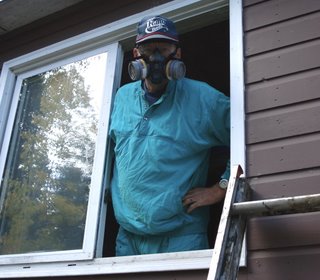 One of the year's least pleasant discoveries occurred on a trip to the cottage in late August. We discovered mold in the master bedroom. Fortunately, it hadn't spread to the rest of the cabin. The room has now been gutted, setting up a major renovation project for Stan in 2007. A new metal roof has been placed on the cabin, the sauna and the screen house, ensuring that the roof problems won't reoccur. 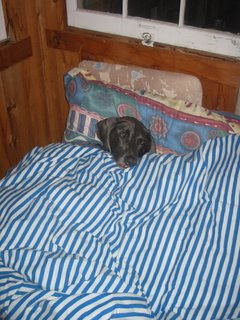 As empty nesters, Kate and Stan were told they would have more free time, less responsibility. We have discovered that Greta takes more attention than Peter ever did (which we should have already known). Greta has yet to meet a door she doesn't want to be on the other side of. As a 10 year old dog, Greta is part puppy and part old woman. Still, she does have personality. 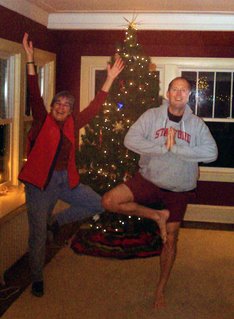 Even if life isn't filled with idle moments, the transition to the empty nest has a few benefits. Stan has less trouble finding the remote controls (or at least has no one but himself to blame if he can't locate them). And perhaps the house stays a bit better organized. Kate and Stan have taken up yoga in their spare time. It's fun, but not easy. Our "tree poses" are more reminiscent of the jack pines at the cabin teetering in the wind than a giant oak tree, that's for sure. 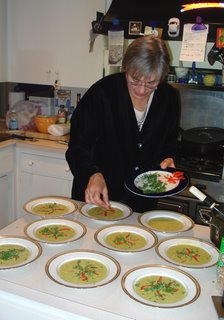 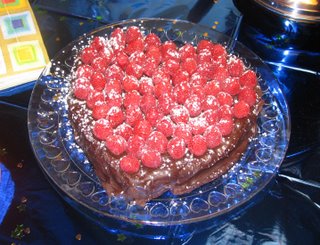 By Stan's count, we have "discovered" about 93 times this year that Kate is a great chef. It is a joy to be on the receiving end of Kate's creative approach to food. In an effort to keep the tonnage down, Stan has continued to bike to work year round. Stop and visit any time. You can count on pleasant company and great food.

It can hardly be called a discovery, but 2006 has reaffirmed what we've known for a very long time - 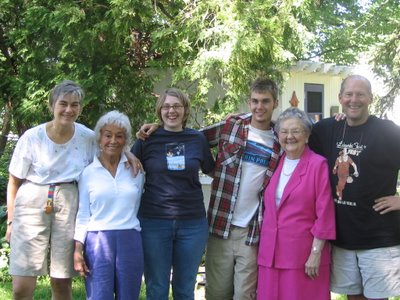 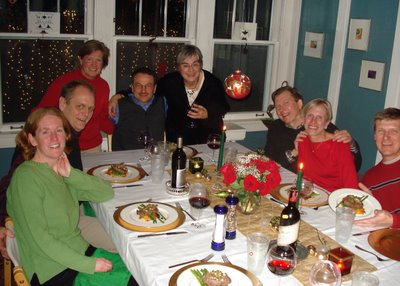 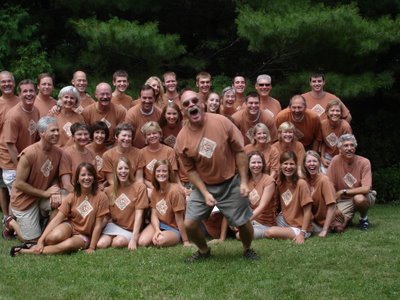 are the most important thing. Have a great holiday and a wonderful 2007. There's always room at 2134 Carroll. Stop and see us! 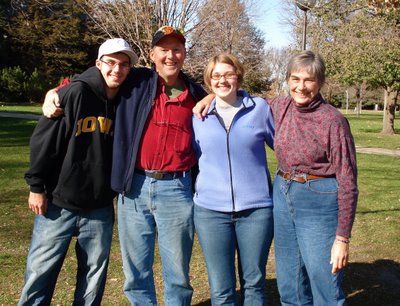 Here's the unretouched version of the photo of Madeline: 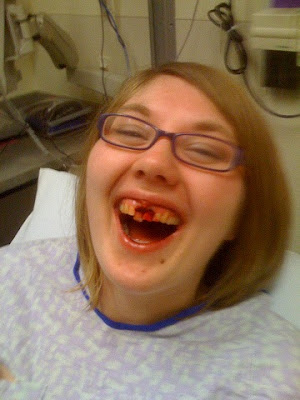 The Official Holiday Card will be coming soon and demands top billing. I need space in case I have other things to write in the next couple of weeks.

It's odd how things sometimes converge. This morning I finished The Life and Times of the Thunderbolt Kid, a memoir by Bill Bryson. I think it would be a great read for anyone, but particularly for me. For Bill Bryson grew up in Des Moines, Iowa at the same time that I was growing up in Newton, Iowa. So much of his childhood and much of mine took place in the same places. Bishop's Cafeteria. The big theaters of Des Moines. The kiddie corral at Dahl's. He lived in the big city of Des Moines - my family went there often. His reflections on those times really resonated with me and took me vividly back to my childhood. He ends the book talking about how great it would be if we had somehow kept the the things that were great about those times (but added Dolby sound). He finishes the book with these sentences, "What a wonderful world that would be. What a wonderful world it was. We won't see its like again, I'm afraid." 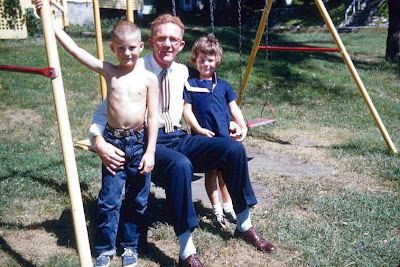 And of course Christmas in many ways does the same thing. As a person in middle age with grown children, Christmas is both a time when I reflect on blessings and remember holidays past. Our holiday celebrations are great. Wonderful quiet times with family and friends. Still, they lack the wonder of racing down the stairs to see what Santa has brought and running right by the slot car set onto the porch. The sinking feeling of being somewhat stiffed by Santa was short-lived, followed soon by the joys of hot slot car racing. 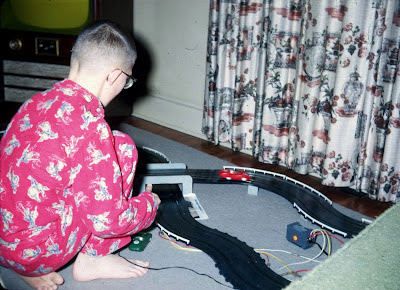 Or the joys of watching your own children have similar experiences. 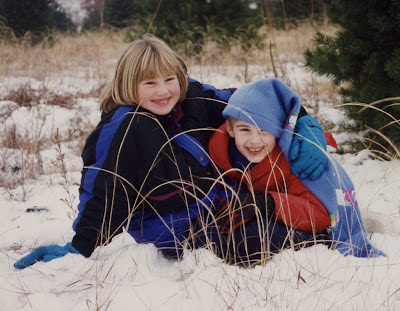 Then, as I was walking Greta on this pretty, sunny day and listening to a shuffle of songs on my iPod, I heard a James Taylor song ("Letter in the Mail") that I swear I have never listened to before, about the passing of things. About change. About good things lost that aren't coming back (at least that was what it was about for me today).

Part of me laments the loss of those times. Part of me feels that my generation hasn't made this a better world - that life was somehow better in those simpler times. I'll bet at times my dad felt the same way. And his dad. 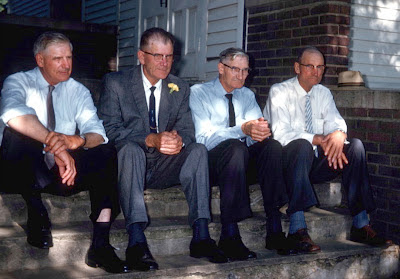